Their innings overshadowed the RR skipper's fluent knock of 82 that helped the side post 164/5 on the board. In reply, Williamson played a well-crafted knock of 51* (41 balls) to bring the game home after England batter Roy gave pace to SRH chase with a 42-ball 60. 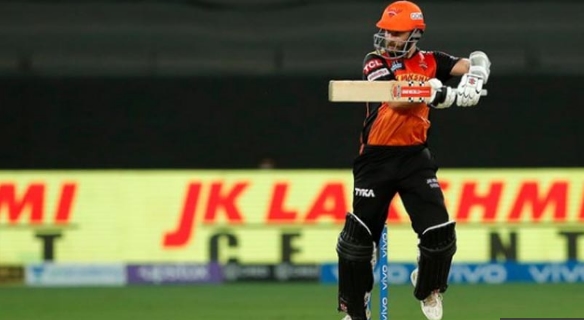 Their innings overshadowed the RR skipper’s fluent knock of 82 that helped the side post 164/5 on the board. In reply, Williamson played a well-crafted knock of 51* (41 balls) to bring the game home after England batter Roy gave pace to SRH chase with a 42-ball 60.

Despite the win, the eighth-placed SRH (4 points) continued to be in the bottom of the table after going out of a play-off run earlier. Royals, meanwhile, dropped a place to sixth with eight points (four wins in 10 games).

Chasing 165, SRH debutant Jason Roy and fellow opener Wriddhiman Saha hammered 57 runs inside the first five overs to give their side an upper hand early on. The duo shot seven boundaries and a six during the 31-ball opening stand before Saha (18 off 11) was stumped by Samson off Lomror (1/22).

The wicket had no bearing on the run flow with Roy continuing on with the good work with skipper Kane Williamson. Roy reached his in style by smashing Rahul Tewatia (0/32) for 21 runs in the 10th over while taking 36 deliveries to reach his half-century.

The Englishman was dismissed by Chetan Sakariya (1/32) in the next over at 60 runs (42 balls) but the blitzkrieg already made SRH comfortable in the chase with 51 runs needed off the last eight overs. Priyam Garg (0 off 1) fell right after Mustafizur Rahman, leaving RR sensing trouble at 119/3 in 12 overs.

Williamson then ensured no further harm came SRH’s way with an unbeaten fourth-wicket stand with Abhishek Sharma, who scored a 16-ball 21 to play his hand in the win. The skipper shot five boundaries and a six during the unbeaten knock while SRH chased down the total with 10 balls to spare.

Earlier batting first, Rajasthan Royals were pushed to the backfoot by pacer Bhuvneswar Kumar (1/26), who dismissed Evin Lewis (6 runs off 4 balls) at the beginning of the second over.

In at no. 3, captain Samson didn’t let them fall of wicket get under RR’s skin by quickly adding 49 runs in the powerplay with Yashasvi Jaiswal. The partnership, laced with seven boundaries and a maximum, saw the duo add 57 runs for the second wicket before Jaiswal (36 off 23) got clean bowled by Sandeep Sharma (1/30) in the ninth over.

RR suffered a further setback when 10 runs later the pink-clad outfit were 77/3 (10.1 overs) with newly-in Liam Livingstone getting dismissed by spinner Rashid Khan. Samson, who was not out at 25 at this stage, took charge of RR innings with Mahipal Lomror, who was happy to play second fiddle in the 84-run stand.

After seeing out initial pressure, Samson did the bulk of the scoring with 41 runs coming between the 14th and the 17th over. The 16th over proved to be the costliest with Samson firing 20 runs off it, including two sixes.

However, SRH bowlers did manage to do some damage control by giving away just 21 runs in the last three overs.

Kaul ended the fourth-wicket partnership in the final over by removing Samson at 82 and struck again by dismissing Riyan Parag (0 off 1). Lomror remained not out till the end with a contribution of 28-ball 29