The rescue official said the recovered body was detected on Tuesday with the help of a ROV SONAR system. 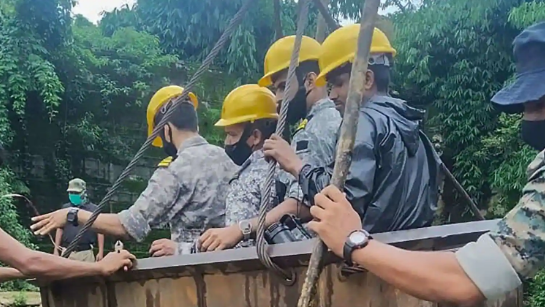 Shillong: A combined team of the Indian Navy and National and State Disaster Response Force on Wednesday pulled out a body from the 500 feet deep flooded coal mine in Meghalaya’s East Jaintia Hills district where four miners still remain trapped since May 30, an official said.

“The highly decomposed unidentified body was pulled to the water surface by the deep divers of the Indian Navy and then taken out in a bucket-type container to the higher grounds at 12:40 hours on Wednesday,” a rescue official told UNI.

“It was not an easy exercise but the deep divers showed their skills amid the high turbidity which is limiting visibility inside the coal pit, besides there were too many other obstructions. They divers dived deep inside and pulled out the unidentified body safely to the surface of the water inside the main shaft,” the rescue official said.

The rescue official said the recovered body was detected on Tuesday with the help of a ROV SONAR system.

The National Disaster Response Force is providing all safety measures and logistics support to the Indian Navy in the entire operation.

He said the body has been handed over to the Meghalaya Police.

Deputy Commissioner of East Jaintia Hills district, Ethelbert Kharmalki said an inquest proceeding has been conducted by the Executive Magistrate at the spot and the dead body is now being taken to the Community Health Centre, Khliehriat for autopsy.

“Relatives have been informed to come forward to identify the retrieved dead body,” Kharmalki said.

At least five migrant miners, including four from Assam and one from Tripura, have been trapped inside a 500-foot flooded coal mine since May 30 at Umpleng area, about 100 Km from the State capital Shillong.

Six other migrant miners from Assam managed to escape the tragedy and they were later escorted by Meghalaya police to their respective homes in Assam.

Meghalaya police have arrested Shining Langstang, the current owner of the illegal coal mine at Umpleng area, while K. Chyrmang, the former owner of the mine was also detained by the police for questioning.

Meanwhile, the whereabouts of Nizam Uddin, the manager of the illegal coal mine who has been absconding following the mining tragedy, remained untraced, even as the Meghalaya police have issued lookout notice for him.

Rescue efforts are on to salvage the trapped miners.

On the other hand, the level of the water before resuming the de-watering process of the main shaft rose by 40 feet as the rescuers did not pump out during the previous day as divers of the Indian Navy were conducting the operation.

Unscientific ‘rat-hole’ coal mining has been banned in the unregulated mines in Meghalaya since April 2014 by a National Green Tribunal order, but illegal mines like this one have flourished freely due to poor enforcement of the ban.