Substitute David Zate bagged the winner 12 minutes from time to give his side all three points. The game got off to a bright start as Zahid Bukhari was tested two minutes into the game by Dipanda Dicka, who was at the end of a cross from Ramhlunchhunga. 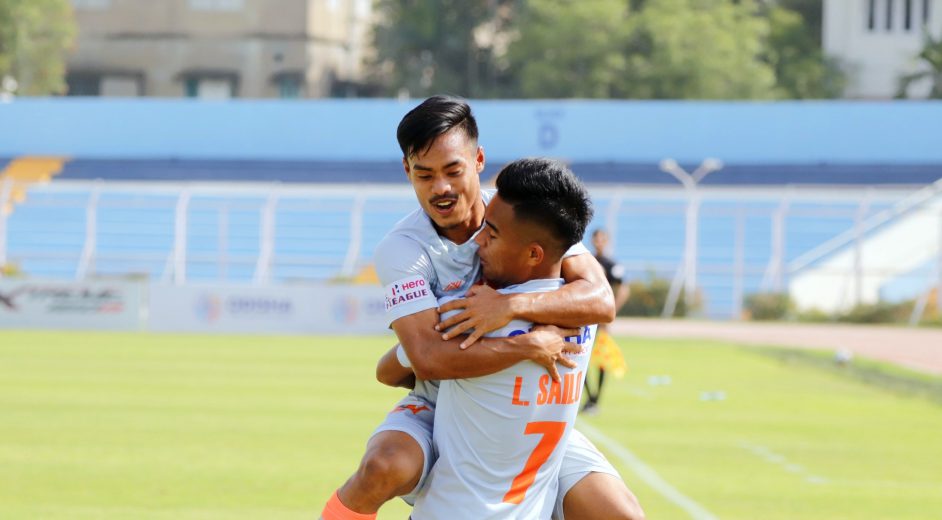 Naihati (W.B): Aizawl FC returned to winning ways after they secured a narrow comeback victory against Indian Arrows in I-league here at the Naihati Stadium on Thursday. Arrows got their noses in front in the first half before Aizawl restored parity just minutes later.

Substitute David Zate bagged the winner 12 minutes from time to give his side all three points. The game got off to a bright start as Zahid Bukhari was tested two minutes into the game by Dipanda Dicka, who was at the end of a cross from Ramhlunchhunga.

Bukhari did really well to deny the Cameroonian and conceded a corner. Ramhlunchhunga turned into a provider again as he lifted a good ball into the box for Lalremsanga, who could not keep it on target as the Arrows defence heaved a sigh of relief.

Hitting the fifth minute mark, Willis Plaza played a quick 1-2 with Dicka at the edge of the box and found himself through on goal with just the keeper to beat. The Trinidadian could not place the ball away from the keeper as Bukhari advanced and blocked the shot that came straight at him.

Indian Arrows tried to break the deadlock moments after that but Vinay Harji’s shot was wayward. The tempo of the game dropped drastically after the initial attacks on both sides. Only a few chances fell to both sets of attackers that were not converted.

Macarton Nickson came the closest as his strike beat keeper Lalmuansanga but hit the underside of the crossbar and stayed out. The opening goal came four minutes from half-time after Arrows took the lead. Parthib Gogoi dribbled into the box and played a low ball across the face of goal after attracting the keeper towards the near post.

Bakhtiyor Qalandarov could not get to the ball in time and it was smashed into an empty net by Taison Singh. Arrows almost doubled their lead shortly after the opening goal but this time the Aizawl defence was alert and dealt with the threat astutely.

Three minutes after the opener, Aizawl squared things up at the other end. Plaza played a perfect lobbed ball towards Dicka, who rounded the keeper and calmly slotted the ball home.

Minutes later, Aizawl were on the verge of leading the game but Dicka was denied by the keeper while Lalremsanga put his glorious effort wide. Four minutes into the second half, Qalandarov’s well-timed interception denied Gogoi a shot at goal.

Ten minutes later, Aizawl were awarded a freekick near the edge of the box. Ramhlunchhunga placed it on target but straight at the keeper. The initial attempt was spilled by Bukhari but pounced quickly on the ball before Dicka could reach it.

Mid-way through the second-half, David Zate replaced Plaza. Shortly after that substitution, Dicka went on a promising run but his shot was blocked by the Arrows defence.

The rebound fell to Lalremsanga who placed it wide at the near-post. At the other end, on the counter, Lalrengmawia brought Gogoi down and earned himself a yellow card. The free-kick was too far from goal as Gogoi smashed it into the stands.

A little over ten minutes after coming on, Zate made his impact on the game as he got past Raj Basfore to turn the game on its head. Basfore completely missed his header to intercept a long-ball that was played towards Zate.

Zate’s first touch was perfect and his fresh legs were able to help him charge into the box and slot the ball past Bukhari into the far post to give his side the lead of the game. Indian Arrows were disheartened after conceding the second goal and could not find an equaliser.

A late goal meant that Aizawl are still the only side without a single drawn game this season. They sit at the top of the Relegation Playoff table with 18 points. Arrows will stay third for now level on points with three other teams who all have a game in hand.