He said terrorism has not brought laurels to anybody in the world. 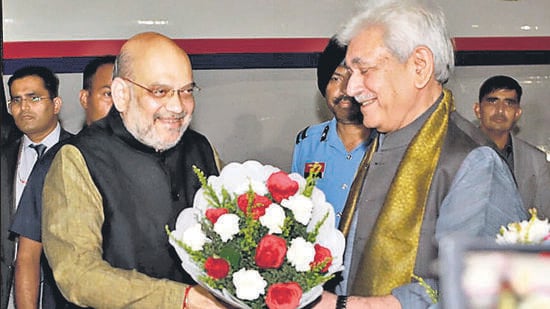 Baramulla: Union Home Minister Amit Shah on Wednesday said that India will not hold talks with Pakistan instead will talk to the people of Jammu and Kashmir.

Addressing his first grand public rally in Baramulla after the abrogation of Article 370 in Jammu and Kashmir, Shah said that India won’t talk to Pakistan.

“Some people suggest me that I should talk to Pakistan. These suggestions are coming from the people who have ruled here for seventy years. But I am clear, I don’t want to talk to Pakistan. I would talk to the Gujjars and Paharis of Baramulla. I will talk to the youth of Kashmir. They (Pakistan) have spread terrorism here,” Shah said in the rally.

He said terrorism has not brought laurels to anybody in the world.

“42000 people of Jammu and Kashmir were killed since 90’s due to the terrorism. Who is responsible for their death,” he said, adding the terrorism was slowly vanishing from the J&K.

He said that Narendra Modi government is determined to uproot the terrorism from the Jammu and Kashmir with full might.

Shah launched a scathing attack on Farooq Abdullah and Mehbooba Mufti and blamed the two families for destroying Jammu and Kashmir. He also targeted Gandi family for Kashmir tragedies.

“Mehbooba (Mufti) ji said that Home Minister should go back only after giving account of (what they have done). Listen Mehbooba ji with open ears and eyes, what we have done, we will give its account but what you and Farooq (Abdullah) sahib have done, you should give that account later… I have come here to ask you, Mehbooba and Farooq sahib, tell us how much investment has come to Kashmir in 70 years, how many industries have been set up, how many factories have been opened and how many youth have been given employment. There has been investment of only 15,000 crore in 70 years. In three years, Modi ji brought an investment of 56,000 crore,”he said

He called the National Conference (NC) as “Abdullahs and sons” and the Peoples Democratic Party (PDP) as “Mufti and company”.

The Home Minister said that 22 lakh tourists visited Kashmir this year which is a record and the flow continues to usher in prosperity in the valley. The tourist flow provided jobs to the youth of Kashmir in a big way.

“Kashmir was terrorist hot spot earlier, but now it is tourist hot spot has provided work to thousands of youth of the valley”, he said.

He said J&K polls would be held soon after completion of electoral roll revision.

Shah said that as soon as the electoral process would be over the elections would be held in Jammu and Kashmir.

He said the Kashmir will flourish with the democratic process not with the terrorism and destruction.

He said when he decided to attend the rally in Baramulla he was told nobody will come to the rally but thousands have turned here to depict that people want peace and prosperity in the region.

Shah stopped his speech when an “Azaan” (mid-day prayer call) was announced from a nearby mosque. He asked people if he would start the speech when the call was over…a thunderous applause with “Amit Shah Zindabaad” slogans echoed in the stadium.