The projects launched include: Launch and operationalisation of the 35-km long cross border rail link from Jaynagar in Bihar to Kurtha in Nepal, built with Indian assistance, and Inauguration of the 90 km long 132 KV Solu Corridor transmission line built with Indian Line of Credit at a cost of INR 200 crore. 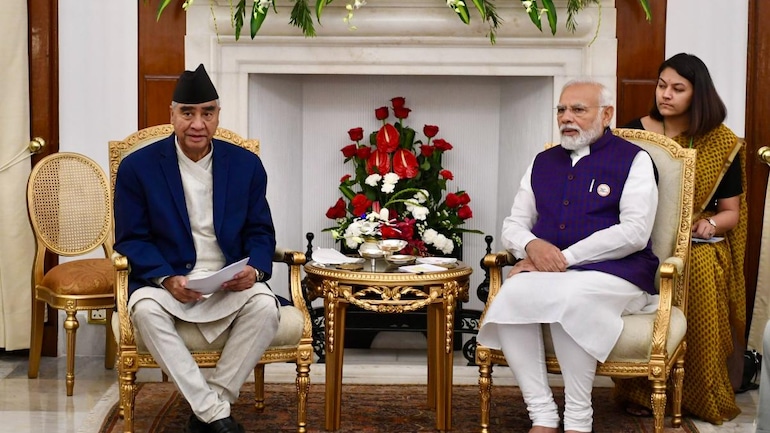 The projects launched include: Launch and operationalisation of the 35-km long cross border rail link from Jaynagar in Bihar to Kurtha in Nepal, built with Indian assistance, and Inauguration of the 90 km long 132 KV Solu Corridor transmission line built with Indian Line of Credit at a cost of INR 200 crore.

The Jaynagar-Kurtha section is part of the Jaynagar-Bijalpura-Bardibas rail link (total length 68.72 km) being constructed with grant assistance of INR 548 crore from the Government of India.

M/s IRCON is the executing agency. KRCL. • It is a 35 km rail section, three km of which lies in the Indian state of Bihar and the rest in Nepal. The section consists of eight stations viz. Jaynagar in India, Inarwa (border station), Khajuri, Mahinathpur, Baidehi, Parwaha, Janakpur (religiously significant) and Kurtha in Nepal. •

This will be the first broad-gauge passenger rail link between the two countries, opening an entirely new dimension for cross-border connectivity. Till 2014, this was an existing rail service on a metre-gauge rail link between Jaynagar and Janakpur. •

The train will be operated by Nepal Railway Company (NRC), with assistance of KRCL and IRCON. B. Hand-over of Solu corridor transmission project • The Solu Corridor 132 kV power transmission line and substation project is one of the major projects in Nepal undertaken under Government of India’s Line of Credit.

• This is a 90 km 132 kV Double Circuit line with a project cost of approx. INR 200 crore. The project was executed by an Indian company, Mohan Energy, under EPC model.

• After its operationalization, it will evacuate electricity from existing and upcoming hydro projects in these areas into the national grid, and also supply power into the rural electrification networks of these districts. Therefore, it is an important axis of socio-economic development in this largely rural part of Nepal, in addition to contributing to Nepal’s overall economic and industrial development.

The 10 districts are mostly located in central/ northern part of Nepal • This forms part of India’s post-earthquake reconstruction assistance to Nepal, and follows the recently completed (November 2021) project of reconstructing 50,000 homes for those impacted by the 2015 earthquake.

(Following the earthquake of April 2015, Government of India had committed USD 1 billion, comprising of USD 250 million as grant and USD 750 million as Line of Credit, for post-earthquake reconstruction projects in Nepal.)

• Other projects being undertaken as part of post-earthquake assistance include reconstruction of 71 educational institutes in 8 districts of Nepal. 28 cultural heritage projects in seven districts of Nepal are also being restored, on which work on the ground has begun for 24.

D. Launch of Rupay in Nepal • Nepal SBI Bank (NSBL), a subsidiary of SBI and Nepal’s largest international bank, worked on this project over more than a year and, with support from Nepal’s Central Bank, has been able to make RuPay cards functional on all NSBL POS machines in Nepal. As a result, the domestic variant of RuPay card (roughly 83% of all RuPay cards issued) will work on about 1,400 POS machines in Nepal.

• NSBL POS machines are present in major locations across Nepal, including religious sites such as Pashupatinath, Lumbini, Janakpur and Manakamna.

• Its launch in Nepal is be a milestone in bilateral financial connectivity. It will facilitate bilateral tourist flows, strengthen people-to-people linkages and further contribute to establishing RuPay’s international credentials and visibility.

• The launch will forge a new path to financial convenience and empowerment with the use of technology and innovation. It will not only enable ease of payment for RuPay car holders but also uplift Nepal’s payment ecosystem capabilities.

• Nepal is now the fourth country outside India where RuPay is live, others being Bhutan, Singapore and UAE. The two sides exchanged Documents, including:E. Framework Agreement on Establishment of International Solar Alliance (ISA) • Nepal becomes the 105th country to sign on to the Framework Agreement of ISA.

The MOU envisages cooperation on capacity building for Nepal’s railway personnel through technology and knowledge transfer, providing training both in India and by developing training institutes, maintenance depots and workshops in Nepal as well as technical support for Railway Systems, Operation and Maintenance, and cooperation in IT sector related to railway transportation and services. •

A Joint Working Group will be established under the MOU to provide guidance and support for implementation of the cooperation activities. They also witnessed Exchange of Agreement on Supply of Petroleum Products between IOC and Nepal Nepal Oil Corporation;

The Agreement is in the form of an umbrella agreement enabling IOCL to supply petroleum products to NOC, including through the Motihari-Amlekhgunj pipeline which was commissioned in July 2019. H. Agreement for sharing of Technical Expertise between IOCL and NOC •

The Agreement is intended to assist NOC in acquiring technical knowledge and skill in petroleum products, and in the operation and maintenance of facilities required for the purpose. •