India must come together to achieve ‘developed nation’ goal: PM

"On one hand there are people who don't have a place to live, on the other hand, are the people who do not have space to keep ill-gotten money," PM Modi said. 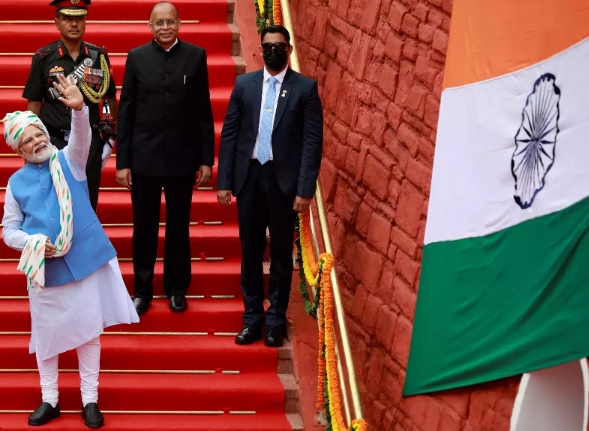 New Delhi: Setting the tone for India’s journey for the next 25 years and her goals for the centenary celebration of Independence, Prime Minister Narendra Modi on Monday said India has to be a developed nation by 2047, and to achieve that all must come together.

Addressing the nation on the 76th Independence Day from the ramparts of the Red Fort, Modi hailed their motherland as the ‘Mother of Democracy ‘, and stressed fighting corruption and dynastic politics that have perforated through every institution.

Setting up goals for the next quarter until the 100th year, Modi said that the country should come together and achieve the goal of being a developed nation by following the ‘panch pran’ (five pledges),.

The other four ‘prans’ are getting rid of the slave mentality, taking pride in our legacy, a sense of togetherness, and citizens being aware of their duties.

“We should completely get rid of any kind of slave mentality. …We should take pride in what we are and strive to be the best of ourselves,” he said.

Modi appealed to the younger generation to work incessantly for the next 20-25 years to put India in the league of developed nations. He insisted on cutting dependence on imports and making India self-reliant.

Recalling the sacrifices made by Indian freedom fighters, the Prime Minister in a Tricolor safa and white overalls hoisted the Tiranga hailing the “mother of democracy” who has been proven innumerable times as she faced multiple challenges during her journey of 75 years.

“What have we not suffered? We faced a food crisis, and we became victims of war,… terrorism has created many challenges, innocent civilians were killed, the proxy war continued, and natural disasters kept coming.

“We saw many ups and downs. But amid all this India continued to move forward. India’s diversity is its power,” the Prime Minister said.

“This mother of democracy, this India has proved that we have a priceless potential,” he said.

The Prime Minister also recalled the contribution of tribal warriors like Birsa Munda, Tirot Singh, and Alluri Sitarama Raju who played a pivotal role in keeping the freedom struggle alive in every corner of India.

He also stressed that India is an aspirational society where changes are being powered by a collective spirit.

“India is an aspirational society and such a society is an asset. The people of India want positive changes and they want it at a quick pace. They also want to contribute towards it,” he said, calling on the political community to deliver at the same pace as the dreams are being dreamt by the countrymen.

The PM also talked about fighting corruption and dynastic politics, and said, these two are the biggest banes in India’s progress and need to be addressed in time.

Modi said in the ‘Amrit Kaal’ of Independence, the coming 25 years in the run-up to 100 years of Independence in 2047, there are some problems that need to be addressed urgently. “One problem is corruption, second is nepotism,” the Prime Minister said.

“When I talk about nepotism, people think I am only talking about politics. No, unfortunately, this evil of the political field has nurtured nepotism in every institution of India,” he said.

“On one hand there are people who don’t have a place to live, on the other hand, are the people who do not have space to keep ill-gotten money,” PM Modi said.

“Corruption is making our country hollow like a termite. The country will have to fight against it,” he added.

He also hailed the Make in India initiative that he said the Indian Forces have taken a head-start in. Modi also called on the nation to respect the women’s power in the country.