The "landmark" event coincided with the celebration of India’s 75th Anniversary of Independence, the MEA added. 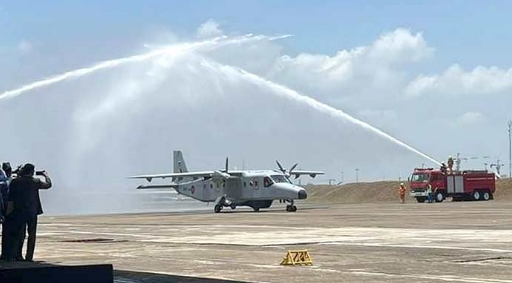 New Delhi: In a move that will contribute more towards the security of the Indian Ocean Region at large, India on Monday gifted a Dornier Maritime Reconnaissance aircraft to Sri Lanka at a special event held at Air Force Base, Katunayake.

The aircraft will strengthen the maritime security of the country.

Navy and Air Force personnel of Sri Lanka who received training in India for close to four months shall operate the aircraft. They will also receive operational support from their Indian counterparts, the Ministry of External Affairs said.

“The aircraft would act as a force multiplier, enabling Sri Lanka to tackle multiple challenges such as human and drug trafficking, smuggling and other organized forms of crime in its coastal waters more effectively. Induction of the aircraft is timely in view of the current challenges to Sri Lanka’s maritime security,” the MEA added.

The “landmark” event coincided with the celebration of India’s 75th Anniversary of Independence, the MEA added.

The capability of the aircraft to undertake Search and Rescue operations exemplifies its direct benefit to the people.

It may be recalled that maritime security has been identified as a key pillar of the Colombo Security Conclave.

Speaking on the occasion, High Commissioner Gopal Baglay emphasized that the induction of the aircraft will help in creating a peaceful environment for the progress and prosperity of the people of India and Sri Lanka.

The gifting of Dornier aircraft underscores the cooperation between the two maritime neighbours in the defence and security spheres.

Such cooperation is envisaged to add further capability and capacity to Sri Lanka and is in line with the vision of Security and Growth for All in the Region (SAGAR), the MEA said.