With under 20 minutes to go, it was a tale of two free-kicks. Kuwait captain Saleh Almehtab curled a free-kick into the Indian goal to equalize for the hosts. 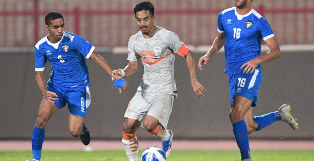 Kuwait City: Team India U-20 signed off from the AFC U-20 Asian Cup Football on a victorious note with a 2-1 win against host Kuwait at the Ali Sabah Al-Salem Stadium here on Tuesday night.

With this win, India finished third in Group H of the AFC U-20 Asian Cup Uzbekistan 2023, behind Australia and Iraq.

Taison Singh and Gurkirat Singh scored the two goals for India, while Saleh Almehtab pulled one back for Kuwait.

India started off on the front foot, and in the very first minute, a long throw hurled into the box caused some confusion in the Kuwait defense, resting in an Indian corner. Himanshu Jangra made a fine run at the near post onto a Vibin cross, but it went over the cross-bar. Goalkeeper Zahid Bukhari had to make a crucial save a minute later off a shot by Fahad Alazmi.

However, it was captain Taison Singh who gave India the early lead in the eighth minute, when he burst into the box, skipped past his marker, and drove a powerful shot into the top corner.

Kuwait pounced on the attack soon after, and Jarah Alheleeli struck the Indian cross-bar from a free-kick.

Looking for the equalizer, Kuwait looked to continue their attacks, while India tried to hit them on the break. Himanshu Jangra broke free on the left, cut in, and tried his luck, but it was blocked.

Jangra had another opportunity in the 19th minute when a Vibin corner found the former, who nodded it into the ground, but Kuwait goalkeeper Bader Alajmi found the time to pounce on it.

Around the half-hour mark, Zahid rushed out to intercept an aerial through ball. Turki Alshammari, in an attempt to get the ball, barged into the India keeper and knocked the ball out of his hand, as the referee called for a foul.

With around five minutes to go, Abhishek Tekcham was released down the right by Taison, as the former beat his marker entered the box, and sent in a low cross, but nobody could get onto the end of it.

India headed to the dressing room at the halftime break with a goal lead.

Kuwait came out with more impetus after the change of ends, with Yosef Alshammari looking to make a few darting runs.

However, it was Taison who had the first real chance of the half in the 53rd minute, when he charged down the right, cut inside, and unleashed a left-footer that was saved by Alajmi.

A little after the hour mark, a Vibin corner fell to Gurkirat, whose header was blocked. Sajad Hussain, who got on to the rebound, struck it over the target.

With under 20 minutes to go, it was a tale of two free-kicks. Kuwait captain Saleh Almehtab curled a free-kick into the Indian goal to equalize for the hosts.

Kuwait’s lead lasted for just three minutes, however, as Taison, on one of his numerous runs down the right, was brought down outside the Kuwaiti area. Gurkirat stepped up to the ball and sent a powerful shot goalwards, as it took a deflection before going into the net.

With the match winding down to a frantic end, Gurkirat broke down the right on a counterattack, as he entered the box and unleashed a shot, but it went over. India made one change, bringing on Aphaoba Singh in place of Himanshu Jangra in the closing stages, as the match soon came to an end, with India taking the three points.