India asks students to leave Kharkiv immediately, even on foot, ‘based on Russian inputs’

"This is an urgent advisory to all Indian nationals in Kharkiv. For their own safety and security they must leave Kharkiv immediately, Repeat immediately, in the light of the deteriorating situation. 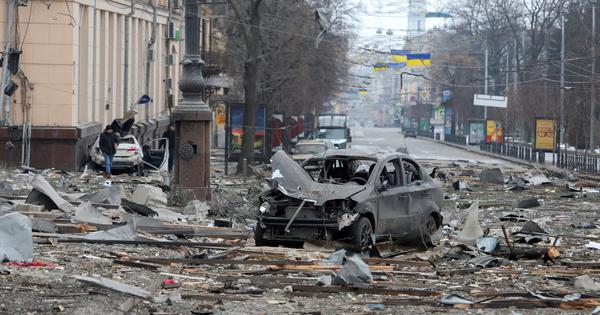 New Delhi: The Indian Embassy in Kyiv on Wednesday asked Indians sheltered in underground bunkers and subways in Kharkiv to leave the war-hit city by 6 pm local time and move to three safe zones, in an urgent advisory that was issued based on “inputs received from Russia”.

“This is an urgent advisory to all Indian nationals in Kharkiv. For their own safety and security they must leave Kharkiv immediately, Repeat immediately, in the light of the deteriorating situation.

“They should proceed to Pesochyn, Babai, and Bezlyudivka as soon as possible for their safety. “Those students who cannot find vehicles or buses and are in the railway station can proceed on foot to Pesochyn (11km), Babai (12km) and Bezlyudkiva (16 km),” it said.

“Proceed immediately. Under all circumstances, Indians must reach these settlements by 1800 hours (Ukrainian time) today,” it said. “Our students in Kharkiv have been told to leave the city by 6 pm local time, and we have told them of three safe zones, which are 15 km from the railway station. We urge them to reach there in any manner,” the Ministry of External Affairs spokesperson Arindam Bagchi said in a special briefing.

He said the three locations mentioned – Pesochyn, Babai and Bezlyudivka – “are reasonably close and are safe zones”. “The request is to see if they can move there. Yes I understand there are reports of some people reporting difficulty of various kinds, including of violence; we are in touch with the student coordinators, and we urge this advisory to be taken seriously,” he added.

He also said that some Indians had left Kharkiv last night by train and some had left this morning. “Let’s see whoever is left, our effort is to try and bring all of them out,” he added.

He also said that the Indian Embassy in Kyiv is exploring options for a team to reach eastern Ukraine, to assist in the evacuation of citizens who are stuck in Kharkiv and Sumy. “We are seeing if our teams can reach there, the route is not open all the time, and the situation is dynamic,” he said, referring to the intense fighting going on there between Russian and Ukrainian forces.

According to estimates, over 3,000 Indians are still in Kharkiv, which had the largest concentration of Indians in Ukraine, at over 7,000 before the conflict began. Earlier in the day, Russian Ambassador-designate Denis Alipov said that Russia is in touch with India with regard to the Indian students stranded in Kharkiv and Sumy, and is working to set up humanitarian corridors for their evacuation.

“Russia will do everything to ensure the safety of Indians and for their evacuation,” he said. “We are in touch with Indian authorities as regards citizens of India stuck in Kharkiv and Sumy and those areas in the northeast where combat actions are going on.”

“We have received the Indian request for emergency evacuation of those stuck in Russian territory, and are actively working on ways and means to launch an operation to provide humanitarian corridors so that people can have safe passage on Russian territory,” he added. His remarks come as Russian forces took control of Kharkiv on Wednesday.