The two countries are set to sign a special security declaration during the talks, sources said. 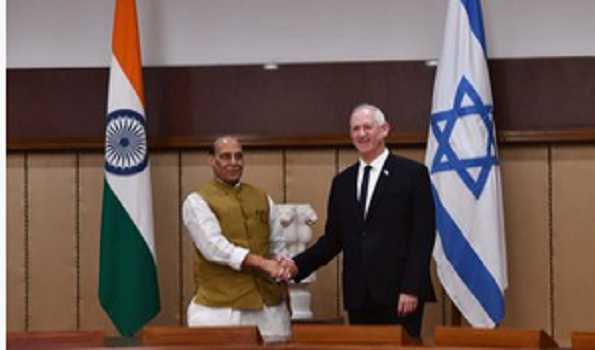 New Delhi: Marking 30 years of security and diplomatic relations between India and Israel, the Defence Ministers of the two countries- Rajnath Singh and Benjamin Gantz began talks here on Thursday.

The two countries are set to sign a special security declaration during the talks, sources said.

The Israeli Defence Minister Benny Gantz laid a wreath at National War Memorial in the morning.

“At 10.00 AM today, Raksha Mantri Shri @rajnathsingh will hold talks with the Defence Minister of Israel, Mr. Benjamin Gantz, who is on a official visit to India,” the office of Defence Minister Rajnath Singh tweeted.

“I am currently taking off to India for a visit that marks 30 years of diplomatic defense ties between Israel and India. During the visit I will meet with Prime Minister Narendra Modi and Defense Minister Rajnath Singh to discuss the expansion of our cooperation,” Gantz said in a tweet last night.

The Israeli Defence Minister is scheduled to meet Prime Minister Narendra Modi at 5 PM on Thursday.

The ‘special security declaration’ being signed between the two countries is expected to be largely ceremonial, reports in Israeli media claimed.

Gantz’s India visit was initially planned to take place in late March, but it was postponed amid a series of deadly terror attacks in Israel.

Israel has sought to strengthen defense relations with India in recent years particularly in air and missile defense areas.

India has purchased billions of dollars worth of weapon systems in recent years.

Israeli Prime Minister Naftali Bennett also scheduled a trip to India in March, but postponed it after contracting Covid-19. The new date is yet to be decided.

Full diplomatic relations between India and Israel were established in 1992.

Defense, economic and diplomatic ties between the two countries continued to grow in recent years with Prime Minister Narendra Modi becoming the first Indian Prime Minister to visit Israel in 2017.