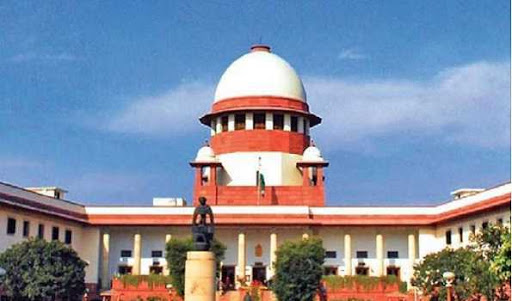 New Delhi: Indian Union Muslim League (IUML) on Tuesday moved the Supreme Court to challenge the Ministry of Home Affairs’ May 28 order for the minorities from Afghanistan, Bangladesh and Pakistan, who have taken refuge in India, to apply for citizenship under Citizenship Amendment Act.

“In exercise of powers conferred under Section 16 of the Citizenship Act, 1955 (57 of 1955), the central government hereby directs that powers exercisable by it for registration as a citizen of India under Section 5, or for grant of certificate of naturalisation under section 6 of the Citizenship Act 1955 in respect of any person belonging to the minority community in Afghanistan, Bangladesh and Pakistan namely, Hindus, Sikhs, Buddhists, Jains, Parsis and Christians, residing in the districts mentioned and the states mentioned below,” the the MHA notification read.

Being the first party to approach the apex court against the CAA in 2019, the IMUL has objected to the said notification on the ground that the provisions of the Citizenship Act cited do not permit the classification of applicants on the basis of religion.

“Therefore, the attempt being made by the Respondent Union in whittling down the applicability of the two provisions through an executive order is illegal,” the IUML’s application drawn by advocate Haris Beeran and filed through advocate Pallavi Pratap stated.

It was further submitted that the MHA order “does not withstand the test of Article 14 inasmuch as it treats people within a particular class ie persons entitled to apply for citizenship by registration and naturalisation unequally by virtue of their religion.”

The league also highlighted how the Central government had earlier assured the Supreme Court that a stay of the CAA, 2019 was not necessary since rules have not been framed under the Amendment Act, citing the MHA’s May 28 notification as an attempt to circumvent this assurance, IUML contended.

“A bare reading of the order dated 28.5.2021 as well as the provisions challenged under the present writ petition i.e. the Amendment Act , Order 3A of the Foreigners Order 1948, Rule 4(ha) of the Passport (Entry into India) Rules, 1950 makes it abundantly clear that the intention behind the three legislation’s are one and the same . That this Hon’ble Court has held in a plethora of decisions that what cannot be done directly will not be permitted to be done indirectly, and therefore the order dated 28.5.2021 ought to be stayed,” the application said.

The IUML further argued that if citizenship is granted under the challenged notification/ order, and subsequently the CAA is struck down by the Supreme Court, “then, to take back the citizenship of these persons, granted pursuant to the present Order, will be a herculean task and would be near impossible to implement.”

“Therefore since the Amendment Act is pending adjudication before this court, it would be in the interest of justice, that the operation of the Amendment Act, including such procedures under the Amendment Act for granting citizenship to illegal migrants be stayed until the matter is decided by the court,” the application stated.

The MHA order under challenge had also empowered Home Secretaries of Punjab and Haryana to process such applications.

The Citizenship Amendment Act passed by the Parliament in 2019 made provisions for granting Indian citizenship to non-Muslim, persecuted minorities namely those from Hindu, Sikh, Jain, Buddhist, Parsi and Christian communities of Bangladesh, Pakistan and Afghanistan, if they had come to India on or before December 31, 2014.