"Imran Khan wants to turn every institution into his Tiger Force. He first attacked the Parliament, [that is] the National Assembly and the Senate, to turn it into the Tiger Force," Bilawal said. 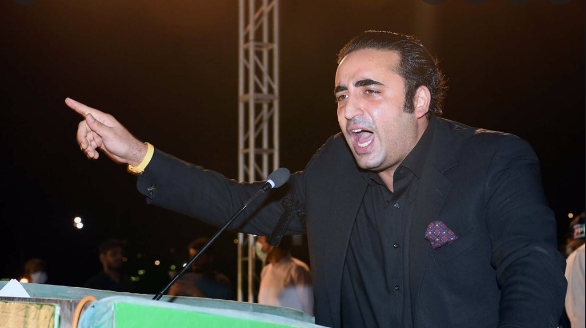 Islamabad: Pakistan Peoples Party Chairperson Bilawal Bhutto Zardari has said that Prime Minister Imran Khan wants to turn every institution in Pakistan, including the Army and the Inter-Services Intelligence (ISI), into his Tiger Force.

Addressing a rally in Karachi on Sunday evening, Bilawal announced the launching of protests against the government.

He also said the Pakistan Peoples Party (PPP) would not allow anyone other than voters to determine who was going to be the next prime minister of the country, Samaa TV reported.

The rally at the Bagh-e-Jinnah was held on the 14th anniversary of the Karsaz blasts (the 2007 Karsaz bombing on Benazir Bhutto’s homecoming convoy), and with an eye to strengthen the party’s foothold in Karachi and mobilise its workers in the metropolis for upcoming electoral challenges.

Formed by the government, the Tiger Force is a group of Pakistan Tehreek-e-Insaaf activists who assist local authorities in emergency relief activities.

He said the PPP wanted to remove Imran Khan because his government had brought disaster everywhere. “It is destruction, not tabdeeli (change).”

“Imran Khan wants to turn every institution into his Tiger Force. He first attacked the Parliament, [that is] the National Assembly and the Senate, to turn it into the Tiger Force,” Bilawal said.

He added that Imran Khan then assailed the judiciary and, in an attempt to subdue it, his government filed references against some judges.

Bilawal said the PTI government also launched a similar attack against the Election Commission of Pakistan, using abusive language and threats of references against the chief election commissioner.

The PPP chief said the PTI government also tried to convert the Punjab Police and the provincial bureaucracy into his party’s Tiger Force. Imran Khan is also trying to make the mainstream media and social media into his Tiger Force, Bilawal said.

“If we allowed him, he [would] want to change entire Pakistan into [his] Tiger Force. He even wants to turn our Army and our ISI into his Tiger Force. We won’t allow Khan, sahib. We won’t allow this selected … to destroy our democracy, politics, and economy,” Bilawal Bhutto Zardari said.

Bilawal’s comments come amid widespread speculations over the appointment of the Inter-Services Intelligence (ISI) director-general. The issue has been in the news since last week following the unusual delay in the issuance of official notification of Lt Gen Nadeem Ahmed Anjum’s appointment as the new chief of the spy agency.

The army, in a statement on October 6, had announced that the incumbent ISI director general, Lt Gen Faiz Hameed, had been made the Peshawar Corps commander while Lt Gen Anjum was appointed in his place. But the Prime Minister’s Office withheld the official notification, leading to rumours about strains in civil-military relations.

Bilawal said the countdown for Imran Khan to go home had started.

Bilawal announced that PPP workers would protest in their home districts against the government and on November 30, the PPP would commemorate its foundation day by holding the main ceremony in the Khyber Pakhtunkhwa province where Imran’s PTI government rules.

Bilawal said everyone could see that a PPP government was going to take power. He said only the PPP had raised its voice against the poor performance of Imran Khan’s PTI government and it would continue its protest until Imran Khan is driven out of government.

Bilawal’s call for protests coincides with the Pakistan Democratic Movement’s decision to launch a nationwide agitation against the government over inflation.

The PPP chairperson said the PTI government had caused poverty and unemployment in the country. “It has become difficult to live, and even more difficult to die,” he said.

He promised jobs and prosperity for people in the event the PPP come to power.

On Thursday PPP Chairperson Bilawal Bhutto-Zardari said he would write a letter to Inter-Services Intelligence (ISI) Director General Lt Gen Faiz Hameed to bring to his notice “how his institution is being defamed” through attacks on journalists.

He made the comment during a meeting of the National Assembly’s Standing Committee on Human Rights which was also attended by several journalists including Absar Alam, Matiullah Jan, Hamid Mir, Asad Toor and Asma Shirazi.

Alam also tweeted the announcement later, saying: “In the backdrop of the attacks against journalists and the wave of fear and horror among Pakistanis, Bilawal Bhutto-Zardari will write a letter to DG ISI [Lt] Gen Faiz Hameed to make him aware of the seriousness of the situation and the damage caused to the respect of the institution.”

During the meeting of the committee, Bilawal, who is also its chairperson, also directed the interior ministry to submit a list of treason cases and cases registered under the Prevention of Electronic Crimes Act (Peca), 2016 against journalists, bloggers and vloggers so far.