The CEO said that there have been no complain regarding the EVMs after the just concluded assembly elections in Gujrat, Himachal Pradesh and municipal polls in Delhi. 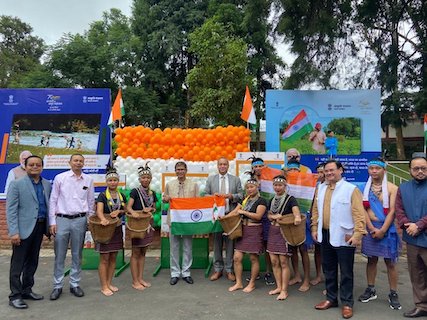 Shillong: Meghalaya Chief Electoral Officer Frederick Roy Kharkongor on Monday said ‘improved’ voting machines will be put into place during the assembly elections in the state early next year.

“The voting machines would go back to the ‘factory reset’ mode if any tempering is attended to be done,“ Kharkongor said during the course of his address at a ‘Vartalaap’, organized by the Press Information Bureau, Shillong, in collaboration with Directorate of Information and Public Relations, Meghalaya in view of the upcoming elections in the State.

The CEO said that there have been no complain regarding the EVMs after the just concluded assembly elections in Gujrat, Himachal Pradesh and municipal polls in Delhi.

“The Election Commission will try to ensure that a free and fair election is conducted in Meghalaya from a couple of months from now,” Kharkongor assured.

The need to project the right narrative is very essential because, elections, he exclaimed are to a large extent a “perception game”.

Speaking on the effectiveness of EVMs, Kharkongar said that the commission has set ever-higher standards of efficient, smooth and professional conduct of elections and has been at the forefront of embracing, adopting and implementing the latest technological advancements in improving and fine-tuning the election processes and systems.

Director General of North East Zone, Ministry of Information and Broadcasting, B Narayanan said that India’s Election Commission is a testament of a “well run election management body”.

Sharing his experience as Election Observer in Karnataka, Odissa and Madhya Pradesh, he expressed that various political parties at times had tried to manipulate the opinion of the general public with the help of media but the processes adopted by the Election Commission of India are “robust enough to bust those false practices”

Roy exalted that it was high time journalists learned to face and handle the “Disinformation War” in large democracies like India, especially during the elections.

“Journalists should learn to identify fake photos and videos, identify fake tweets,” Roy said and also gave examples of many online tools through which fact-checking can be done very easily.

Correspondent from Economic Times, Bikash Singh touched on the subject – the economics behind election and elaborated on the various provisions laid down by the Election Commission for tackling the negative effects of money power during elections.