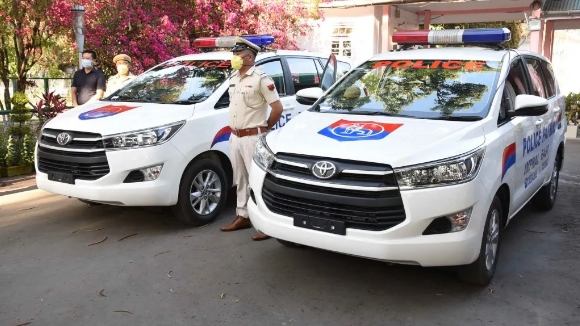 Imphal: Manipur Chief Minister N. Biren Singh On Wednesday flagged off five GPS enabled Highway Patrol Vehicles for the Pallel to Moreh stretch of National Highway 102 and lauded the Chief Secretary, Director General of Police, and the entire police force for their effort in providing security to the public, especially along the highways.

Speaking to media persons on the sidelines of the flagging off ceremony, the Chief Minister said that the State Police force has already flagged off six GPS-enabled highway patrol vehicles to cover the Kangpokpi and Senapati stretch of the highway.

The next preparation is to launch similar patrol vehicles along the Imphal-Jiribam Highway, the Chief Minister added.

With these patrol vehicles, the police can now provide assistance to any truck or driver stranded along the highways, he said adding that the patrol vehicles along the Kangpokpi-Senapati stretch of the highway can be reached through mobile number 9612700785 and those along the Tengnoupal-Moreh stretch on 8794427656.

Biren also observed that the dedicated Highway Patrol for the National Highways in the State has been a dream of the government for a long and that recruitment for setting up of 10th and 11th IRB was conducted for the purpose of launching a Highway Protection Force. He said once the results of the recruitments are declared they will be utilized for the same.

Director General Of Police P. Doungel said since the launching of the GPS enabled Highway Patrol Vehicles along the Mao-Imphal highway, crime rates have been scaled down and these dedicated patrol vehicles can now act on any distress call along the highway 24*7.

He said the government is targeting to provide the same benefits to the Pallel to Moreh highway as this is another important lifeline of the State.

Police want to secure the highway also, not only from the underground and other anti-social elements but also to assist people who are stranded, he said.

At the same time these patrol vehicles will provide support in surprise checks against illegal drug trafficking and other security operations along the route, he added.