Some rounds were fired on spotting the flying object, police said, adding that one battery of the drone was also found damaged due to the bullets. 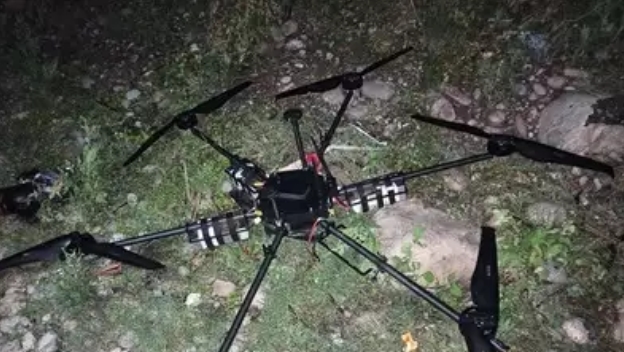 Jammu: Jammu and Kashmir Police on Friday shot down a drone carrying an Improvised Explosive Device along the international border in the Kanhachak area here in the city outskirts.

Police said that the drone was shot down and recovered in the Kanhachack area at about 0100 hrs midnight last night.

Some rounds were fired on spotting the flying object, police said, adding that one battery of the drone was also found damaged due to the bullets.

“The IED was to be dropped for its further transportation by the receiver assigned the task,” Mukesh Singh, Additional Director General of Police, Jammu Zone told reporters here at a press conference.

“Police team from Kanhachak Police Station, on receiving the information, rushed to the spot and found one drone and a packet lying at village Gurah Pattan in Kanachak sector at a distance of about 10 to 12 feet from Jammu- Akhnoor national highway,” he said.

“The squad found one packet and a thin string. The length of the drone is about 6.5 feet, having six wings, two antenna and four batteries (one battery damaged due to fire of bullet) tied with the rods of the drone,” police said.

The capacity of the batteries of drone is about 25000 MAH which is mentioned on the batteries, it said, adding that the Bomb Disposal Squad opened the sealed packet and found one timer IED fitted in a iron box weighing about 5-kgs.

“The Squad destroyed the timer IED on the spot while teams collected all the necessary samples of IED and took the drone to Police Station,” police said.

The drone had a mark “CF PROP 30.2 * 9.9L” and the aerial distance spotted from international Border Kanhachak is about 6.5 Km.

Police has launched a probe into the matter.