Despite the historic judgment of the Supreme Court of India in the Extrajudicial Execution Victim Families Association, Manipur (EEVFAM) case, followed by a CBI investigation into 39 out of the 1528 cases of extrajudicial killings in that state, the Government of India is yet to grant prosecution sanction against any of the members of the armed forces found to be involved in the unlawful killings. 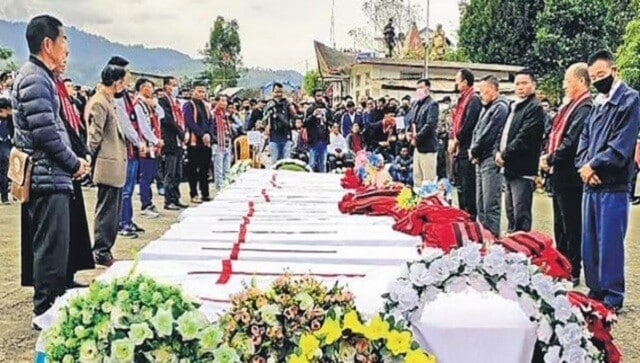 Imphal: The Working Group on Human Rights in India and the United Nations (WGHR) expresses solidarity with the coal mine labourers and protestors killed and injured during the horrific incidents at Oting, Mon district, Nagaland on 4-5 December 2021.

This is not the first time that gross human rights violations have been committed under the Armed Forces Special Powers Act, 1958 (AFSPA) that grants legal immunity for all acts to armed forces when enforced. As long as impunity prevails over justice, this, tragically, may not be the last time.

Despite the historic judgment of the Supreme Court of India in the Extrajudicial Execution Victim Families Association, Manipur (EEVFAM) case, followed by a CBI investigation into 39 out of the 1528 cases of extrajudicial killings in that state, the Government of India is yet to grant prosecution sanction against any of the members of the armed forces found to be involved in the unlawful killings.

The repeal of AFSPA has been a long-standing demand of civilians, survivors, families of victims, human rights movements and activists around India, particularly those that have borne the brunt of this law in the North-East of India. AFSPA also continues to attract significant criticism from UN human rights mechanisms.

The UN Human Rights Committee stated in 1997 that exercising power under AFSPA amounts to exercising emergency powers without resorting to the procedure laid down under section 4 of the International Covenant on Civil and Political Rights (ICCPR).

The Special Rapporteur on Summary, Arbitrary and Extrajudicial Execution, in his analysis of the situation after his official visit to India in 2012, stated that the powers conferred on the armed forces of the Union under AFSPA go beyond permissible limits. He said that the right to life, which appears to be suspended under AFSPA, is a non-derogable right even in situations of emergency. The Committee on Elimination of All Forms of Racial Discrimination (CERD) in 2007 described AFSPA as racist and had urged the Government of India to repeal it within a year.

The Committee on the Elimination of All Forms of Discrimination against Women (CEDAW) in 2014, also recommended the repeal of AFSPA, calling for sexual violence committed against women by armed forces to be brought under the purview of ordinary criminal law. In the last three cycles of India’s Universal Periodic Review (UPR) at the United Nations Human Rights Council (UNHRC), several governments recommended the repeal, review or revision of AFSPA. These recommendations also addressed the accountability of security personnel, the regulation concerning detentions as well as victims’ right to appeal in accordance with international standards.

The Government of India, however, has consistently not accepted but only noted, these recommendations. Similar recommendations are likely to be repeated in the 4th UPR cycle which will begin in October 2022. India will be one of the first countries to be reviewed. Domestically, the Justice Jeevan Reddy Committee recommended repealing AFSPA in 2005, calling the act “a symbol of hate, oppression, and instrument of high-handedness”.

In the aftermath of the Oting incident, several Chief Ministers from the North-East, including those of Nagaland, Meghalaya and now Manipur, has renewed calls to repeal AFSPA. The law was lifted from Meghalaya a few years ago and earlier from Tripura state.

The repeal of AFSPA will strengthen the spirit of the country’s constitutional democracy. India’s human rights record is to be reviewed before its peers at the UNHRC in October 2022. Repealing this act would be a positive development to report to the UN Human Rights Council at that time, stated a statement of WGHR.