Chief Constable Nixon said that policemen had been brought in "from all sorts of different parts of the country" to help control the violence. 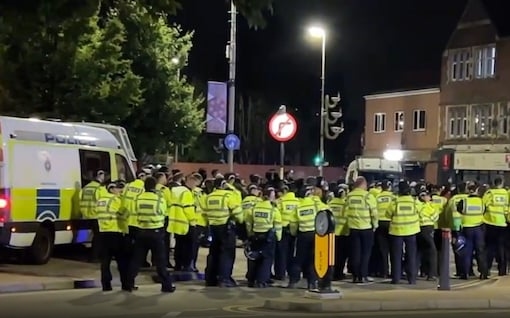 London: Violent clashes between warring Hindu and Muslim mobs in Leicester in Britain left 16 policemen and a police dog injured over the weekend. Nearly 50 people have been arrested.

The clashes follow a number of skirmishes in the city, which were sparked by a recent India-versus-Pakistan cricket match.

Federation chairman Adam Commons said: “My colleagues do not come to work to be subjected to this type of behavior and should not be going home nursing cuts and bruises.”

Chief Constable Nixon said that policemen had been brought in “from all sorts of different parts of the country” to help control the violence.

The fights saw bottles and other objects thrown. Some rioters were seen carrying sticks and batons, the Sun reported.

Saturday’s disorder was reportedly sparked after a 200-strong unauthorized protest descended into violence.

Videos posted online showed gangs of masked men — many in hoods — marching through the city, chanting.

Police officers were pelted with bottles as they tried to keep rival groups apart.

Cars and buildings were also vandalized.

The east of the city has seen increasing trouble since India faced arch-rival Pakistan twice in the T20 Asia Cup in Dubai last month.

Some police officers had to cancel days off to help out as numbers were reduced further by calling in police personnel from around the UK to help secure the Queen’s funeral today.

A total of 47 suspected have been arrested, including 15 after a protest sparked clashes on Saturday night.

Amos Noronha, 20, of Illingworth Road in Leicester, was jailed for ten months after he admitted possession of an offensive weapon at the city’s magistrates’ court.

A further 18 people were arrested on Sunday night for offenses including affray, assault, possession of weapons, and violent disorder.

Some of those arrested included people from outside Leicester, including Birmingham Community leaders from both Muslim and Hindu groups have called for calm.