While raising anti-government slogans, some members trooped to the well of the House. The situation then got from bad to worse with one of the protesting members throwing papers at the Chair. 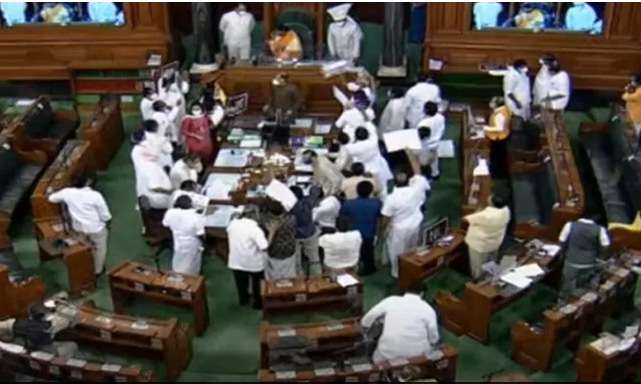 While raising anti-government slogans, some members trooped to the well of the House. The situation then got from bad to worse with one of the protesting members throwing papers at the Chair.

The post lunch session began on a stormy note with Congress, TMC, CPI, AAP and other opposition members pressing for repeal of controversial farm laws disrupting the House which had taken up a short duration discussion on agricultural issues.

As the House reconvened at 2 PM, the Vice-Chairperson Bhubaneswar Kalita announced short-duration discussion on agricultural issues.

On this, Congress MP Jairam Ramesh protested saying he had given notice for a Calling Attention Motion on the “three black farm laws” and the ongoing farmers’ agitation for the last nine to ten months.

The Vice Chairman, however, said that he would come back on the issue and called the names of members for the discussion.

Kalita noted that the decision was taken by the Chairman and he cannot go back.

Acharya said that agricultural production had increased in the country but farmers’ income had not gone up.

“Farmers have been able to increase their produce, but the Government has failed in increasing the income of the farmers. That is the plight the farmers are facing,” he said.

From here on, the protests got louder and some members lost their cool. AAP’s Sanjay Singh climbed onto the reporters’ table and continued shouting slogans against the government and farm laws.

As disruption continued, the Vice Chairman Kalita adjourned the House.

The House met again but the ruckus and chaos continued forcing another adjournment. With no sign of the situation getting any better, the House was finally adjourned at 4PM for the day to meet on Wednesday.