Fresh snowfall and rains were recorded throughout the valley during the night. Several regions on high altitude witnessed heavy snowfall as Srinagar city too received fresh snow. 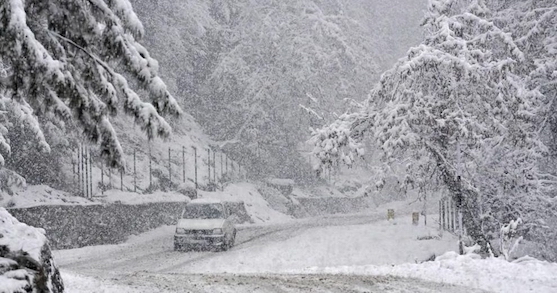 Srinagar: Moderate to heavy snowfall disrupted normal life in the Kashmir Valley on Wednesday. It shut the only road link connecting the valley with the rest of the country and also hit the air traffic.

Several flights from the Srinagar Airport were cancelled and many delayed due to bad weather, officials said. “Our snow clearing operations is underway on the runway…,” a Srinagar airport official said. The Srinagar-Jammu Highway has been shut for traffic after snowfall triggered fresh shooting stones incidents.

The national highway is the northernmost segment of NH 44. It runs from Srinagar in the Kashmir Valley southward to the city of Jammu. The 295-km long highway is one of the two road links that connects the valley with the rest of the country.

Disaster Management Department Director Aamir Ali said it is raining heavily on the NH44 from Udhampur to Banihal. “Shooting stones at Cafeteria Morh, Maroge and Panthyal, have halted the traffic.

“Navyuga Qazigund (has been) closed due to snow on the Qazigund side. Around 300 Kashmir-bound trucks are stranded at Banihal,” Ali said, adding no fresh traffic is being allowed from either side.

Fresh snowfall and rains were recorded throughout the valley during the night. Several regions on high altitude witnessed heavy snowfall as Srinagar city too received fresh snow.

According to Srinagar Meteorological Department, moderate to heavy rain and snow occurred at most places of Jammu and Kashmir with one to two feet of snow at high altitudes. “Srinagar reported 7.5 inches of snow till 8.30 am today,” a MeT official said.

The MeT said there was likely to be significant improvement in the weather from evening onwards. “Overall improvement is most likely from Thursday onwards though. “After this spell, there is no forecast of any major rain or snow till February end,” he added.