With the presence of upper air circulation, more rains were forecast for the city and several districts, including the southern, central and delta districts of the State. 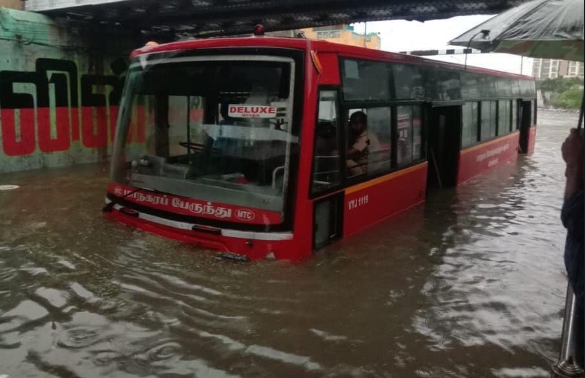 The rains, accompanied by thunder and lightning, began around 2200 hrs last night and has been pouring almost non-stop, with the city recording a staggering 21.5 cm of rains till 0830 hrs on Sunday morning.

The suburban Meenambakkam airport received 12 cm of rain. This was the highest rainfall recorded in the city after the 2015 deluge, which resulted in flash floods.

With the presence of upper air circulation, more rains were forecast for the city and several districts, including the southern, central and delta districts of the State.

The Met Office said under its influence a low-pressure area is likely to form over Southeast Bay of Bengal and neighbourhood around Tuesday. It is likely to become more marked and move west northwestwards towards the north Tami Nadu coast during the subsequent 48 hours, promising more showers for the next four days.

A red alert has been issued for Chennai city today forecasting more rains. As the catchment areas in the city received copious rains, the authorities have decided to release 500 cusecs of water from the Chembakrambakkam and Puzhal reservoir, which were fast filling up and flood warnings were issued in the downstream areas.

The rains were so heavy that several areas in the city and suburbs came under thick sheets of water.

Several arterial roads were also inundated and people in low lying areas had to wade through knee-deep water. The rain waters also entered the households in several areas of the city affecting normal life.

The arterial Duraisamy subway in the heart of the city and the Vysarpadi subway in North Chennai were closed for vehicular movement.

In some areas, incidents of uprooting of trees were also reported in the city.

The woes of the people were further compounded as power supply was hit in several areas and internet services were affected.