“I am in Panjshir,” he said, adding that “the situation is difficult”. “We have been under invasion by the Taliban, their Al Qaeda allies, other terrorist groups from the region and beyond, as usual backed by the Pakistanis. 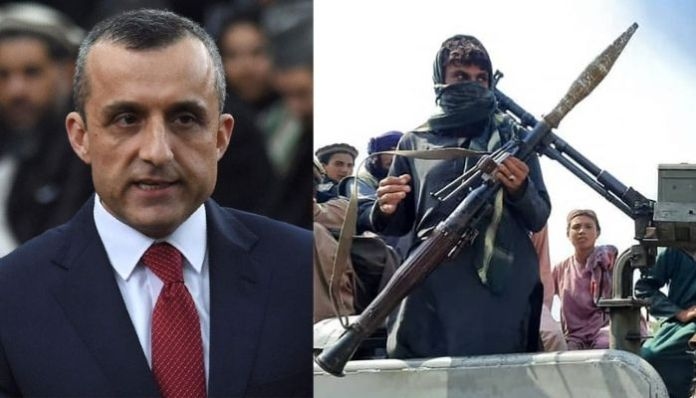 Kabul: Amrullah Saleh, who has declared himself Afghanistan’s caretaker president and has joined the Resistance forces in Panjshir valley, on Friday said that he has not fled the country, and squarely blamed Pakistan for backing the Taliban and terrorist groups like Al Qaeda that have surrounded the province.

In a video message sent to the BBC and Tolo News, Saleh, who has joined forces with the resistance movement of Ahmad Massoud in the northeastern Panjshir province, said the reports concerning his escape from Afghanistan “are totally baseless”.

“I am in Panjshir,” he said, adding that “the situation is difficult”.
“We have been under invasion by the Taliban, their Al Qaeda allies, other terrorist groups from the region and beyond, as usual backed by the Pakistanis.

“We have held the ground, we have resisted; the Resistance is not going to surrender, not going to bow to terrorism, and it’s going to continue,” he said.

“There are difficulties but I have not fled, I have not escaped.
“I want to assure you through this video that everything said at this moment that I have been injured or I have fled, are baseless, fake news,” said Saleh.

He also sent a similar video to Tolo News in Pashto.
In a tweet, he said: “The RESISTANCE is continuing and will continue. I am here with my soil, for my soil and defending its dignity.”
Ahmad Massoud in a tweet said that reports of the Taliban having conquered Panjshir are fake.

“News of Panjshir’s conquests is circulating on Pakistani media. This is a lie. Conquering it will be my last day in Panjshir, inshallah,” he posted.
According to a tweet by an Afghan commando who is part of the Resistance, in Thursday night’s fighting, 450 Taliban were killed, 230 surrendered and 170 Taliban from Badakhshan province “joined the RESISTANCE”.

Agartala: Assam police have foiled abduction bid of two schoolgirls of North Tripura who were allegedly allured with false...
Nation