GV Krishna Reddy: A story of an entrepreneur and an environmentalist

For him, long term corporate growth and sustainable environment go hand in hand. 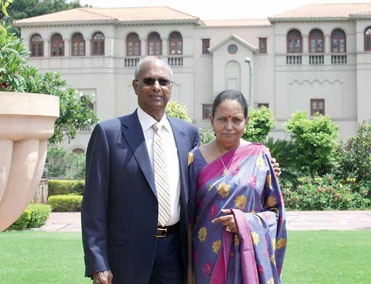 New Delhi: Environment protection is essential for flawless economic growth, believes Dr GV Krishna Reddy. For the entrepreneurs who are environmentalists, the growth of business and preservation of nature goes hand-in-hand, is the philosophy of this eminent industrialist and philanthropist. Recently, environment protection has attracted the attention of global leaders due to emerging climate problems. Concepts such as cleantech and green tech amongst others have emerged to reduce carbon emissions and other wastage produced via industries that concern environment sustainability.

The steps that GVK Group and its verticals have taken since the beginning when its business was established with a view towards environment preservation, indicates how conscious it’s Chairman, Dr GV Krishna Reddy has been on the issue. Consequently, India’s first Independent Power Plant (IPP), Jegurupadu CCPP Phase 1, Andhra Pradesh, was set up in 1997 with the aim of not only reducing the possible pollution impact but to promote healthy environmental practices.

The Rio de Janeiro Declaration, 1992, for the first time brought environmental concerns to the centre stage of the world. Adhering to the principles of nature conservation that emerged from the Declaration, GVK Group pledged to dedicate the infrastructure that will promote environmental sustainability. The construction of the Jegurupadu power plant followed fully nature-friendly practices, making it one of the first ‘green’ power plants not only in India but Asia. Moreover, GVK Industries Ltd also developed a Deer Park at the Jegurupadu Power Plant which was spread over six hectares and was surrounded by 160 acres of greenbelt consisting of over 300 species of plants and trees. The beautiful landscape of the GVK Deer Park was recognised as one of the best eco-parks by the World Bank authorities they came across during their visits across the world.

Inevitably, amongst several other accolades, the power plant was also rated as ‘Eco-Star Gold’ by TERI and recognised by the Andhra Pradesh Pollution Control Board for its outstanding contribution to the development of the Eco Park.

In fact, this principle of sustainability was followed at all the GVK power plants including the 540 MW Goindwal Sahib Thermal Power Project, Punjab which commenced operations in 2017.

Similarly, in this direction, under GVK’s management, the Mumbai Airport has also successfully installed a waste recycling unit in the Airport.

With best-in-class waste management capabilities, it recycled 3,343.16 metric tonnes of total waste generated in the years between 2016-18. The waste is segregated at the source, consequently, 158.59 metric tonnes of hazardous waste was disposed safely as per the guidelines. From rest of the non- hazardous 9793.16 metric tonnes of wastage, 3,343.16 was recycled. Similarly, Mumbai Airport has been using the compost for maintaining gardens produced through food waste via Organic Waste Converter (OWC) Project. OWC is a bio-mechanical composting system that can treat 1 metric tonne per day of the food waste.

Moreover, Mumbai Airport became the first Indian airport to implement waterless urinals. For its comprehensive and unique water conservation project, it was bestowed with the Silver Award at the ACI Asia-Pacific Green Airports Recognition 2020. Through the project, it saves over 1 lakh litres of water every day. Rainwater harvesting, drip irrigation, waste water treatment and recycling amongst others were also implemented to reduce fresh-water consumption.

For promoting greener infrastructure projects, GVK Botanical Gardens have been developing beautiful gardens across all the GVK Group projects. Inspired with the philosophy, “A Tree of Life is much revered to as a symbol of life giving mini wonder,” it has developed a 90,000 sq. m. around Mumbai Airport premises. The Botanical Gardens houses over 77,000 plants of around 100 species. The objective was to promote greenery with exotic, diversified, in-urban public spaces and spread awareness through education and research. This is not just greenery compliance or token symbolism. GVK wanted to go beyond that to create awe-inspiring parks and gardens as an integral part of the development.

Today, the conglomerate is known as the pioneer for developing an environmental friendly industrial infrastructure which not only helps in fostering the economic growth in India, but promoting nature. Similarly, Founder and chairman of the group, Dr. GV Krishna Reddy is known for his passion and commitment towards making India a green abode. Be it the philanthropical arm or power and infra, GVK has already set milestones in the direction of advance sustainable environmental infra projects for the coming generations to be inspired from.

(Disclaimer: UNI will not be responsible in any way for the content of the article.)