Gujaratis trying to capture Bengal by bringing goons from UP and Bihar : Mamata

"What do you (Modi) think of yourself, are you god or superhuman?" the West Bengal chief minister said. 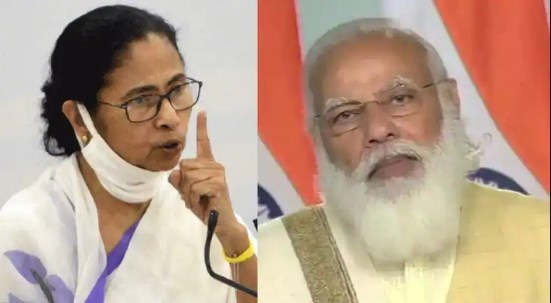 Howrah: West Bengal Chief Minister and Trinamool Congress (TMC) supremo Mamata Banerjee on Sunday alleged that Gujaratis are trying to capture Bengal by bringing goons from UP and Bihar.

Addressing a public meeting here, Banerjee said, “We will not allow Bengal to become like Gujarat.”

“They (BJP) are giving big dialogues about giving money to farmers. I have sent them (Central government) the list (of beneficiaries). Why aren’t they sending the money,” the chief minister questioned.

The TMC supemo alleged Modi is syndicate 1 and Amit Shah is syndicate 2. They are sending agencies to Abhishek’s house, Sudip’s house and to the house of Stalin’s daughter. They are continuously changing police officers.”

Earlier at a public meeting in Hooghly district, Banerjee wondered whether Prime Minister Narendra Modi is “god or a superhuman” to make claims of a BJP triumph in the assembly elections, six phases of which still remain.

“What do you (Modi) think of yourself, are you god or superhuman?” the chief minister said, referring to remarks by the Prime Minister at public meetings that he will attend the oath-taking ceremony of the BJP government in Bengal and request it to implement the PM Kisan Nidhi scheme as early as possible.

The TMC supremo without naming the Indian Secular Front or its founder Abbas Siddiqui, said the BJP is giving money “to a person” to eat into minority votes.

Al Khor (Qatar): The Netherlands have topped Group A at the FIFA World Cup Qatar 2022 as Louis van...
Manipur