Opposition Congress which was eyeing to return to power is leading in 21 constituencies, followed by new entrant, AAP six, Independent two and Samajwadi Party one, the EC data showed. 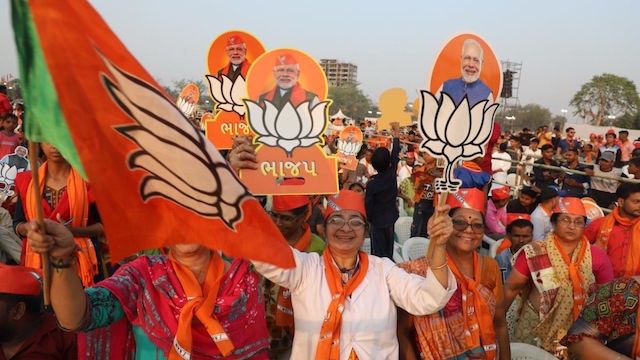 Gandhinagar:  The ruling BJP is heading towards a landslide victory in Gujarat as counting of votes is underway for the 182-member Gujarat Assembly, for which polling were held in two phases recently, the latest trends of the Election Commission showed.

According to poll panel, the BJP is leading in 152 Assembly constituencies and won two seats.

Opposition Congress which was eyeing to return to power is leading in 21 constituencies, followed by new entrant, AAP six, Independent two and Samajwadi Party one, the EC data showed.

Among the prominent BJP candidates, who are leading in their respective seats are Chief Minister Bhupendra Patel from Ghatlodia, Hardik Patel from Viramgam and Rivaba Jadeja from Jamnagar.

As per the EC in Ghatlodia, Bhupendra Patel, who is the sitting MLA, since the initial rounds of counting took a lead over his rival Congress candidate A Yajnik. He has polled 89,844 votes so far.

Congress nominee and Dalit leader Jignesh Mevani is trailing from Vadgam. BJP’s MJ Vaghela has so far got 4,0790 votes, while Mevani polled 3,651 votes.

The Assembly elections were held in two phases on December 1 and December 5 with a turnout of 66.38 per cent.