"You inspire the youth of the country to do better not only in sports but also in other sectors," he said. 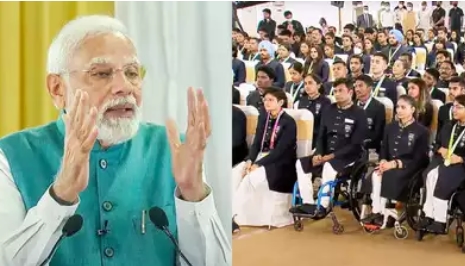 New Delhi: Interacting with the Indian contingent of the recently concluded Commonwealth Games, Prime Minister Narendra Modi on Saturday said that the golden era of India’s sports is here.

“It is definitely an exciting time for the Indian sport. Your role in these successes has also been very important. But this is just the beginning. We are not going to sit quietly. Friends, the golden era of India’s sports is here,” the Prime Minister said.

The Prime Minister listed out India’s sports achievements in the recent past and said that the entire nation is proud of the accomplishments of our athletes.

Interacting with the players, Modi said that they not only win a medal for the country but also strengthen the spirit of ‘Ek Bharat, Shreshtha Bharat’.

“You inspire the youth of the country to do better not only in sports but also in other sectors,” he said.

The Prime Minister highlighted that the country has made two major achievements in the field of sports in the last few weeks.

“Besides the historic performance in the Commonwealth Games, the country has organized Chess Olympiad for the first time. Continuing its rich tradition, we did well in Chess also. I also congratulate all the medal winners,” he said.

Praising India’s performance at the CWG, the PM said the success achieved by the athletes will draw youth towards new sports in the country.

“As compared to last time, we have emerged victorious in four new games. From lawn bowls to athletics, there have been phenomenal performances. This performance will attract youth towards new sports,” he said.

He said that the performance of India’s daughters was amazing- be it in boxing, judo, or wrestling.

The CWG 2022 was held in Birmingham from July 28 to August 8. A total of 215 athletes participated in 141 events across 19 sporting disciplines, where India bagged 61 medals with 22 Gold, 16 Silver, and 23 Bronze medals across various disciplines securing the fourth position on the medal tally.

“We have witnessed the power of the tricolor in Ukraine some time ago. The tricolor had become a protective shield not only for Indians but also for people from other countries in getting out of the battlefield,” he said.

Modi asked the players to go to school and give them the inspiration to do well in life.