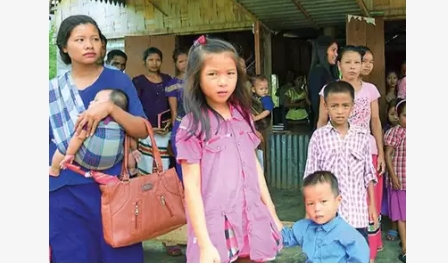 Agartala: Even after the deadline, the Tripura government has not been able to resettle almost half of the Bru families displaced from western Mizoram and sheltered in six camps of North Tripura in 1997 following a communal clash.

As per the decision of the Ministry of Home Affairs (MHA), the North Tripura district administration has discontinued the ration supply to the remaining families in the camps from this month.

As of now, the Tripura government has rehabilitated as many as 3,526 families of a total of 6,969 displaced families in three locations of the North Tripura, Dhalai, and Gomati districts.

Joint Movement Committee (JMC) -an apex body of various organizations of non-Bru residents raised fresh objections to the move of rehabilitating the displaced Brus in the Kanchanpur sub-division of the district, which has been the main reason for deadlock in the rehabilitation.

At least two persons were killed and several injured in December 2020 when JMC resorted to the Assam-Agartala National Highway blockade protesting the resettlement of Bru families in Kanchanpur.

After the skirmish, the state government agreed not to raise any resettlement colony in the sub-division but, allegedly they violated it, which has created a fresh deadlock in the process.

JMC leader Ranjit Nath alleged that violating the agreement, the state government has already rehabilitated around 540 families in the Kanchanpur sub-division and again decided to rehabilitate over 1,250 more Bru families in different villages of Kanchanpur, which would not be allowed anyway.

“Proposed resettlement of 1,250 more tribal families in the small areas of Kanchanpur would create trouble for the indigenous Bengali, Mizo, and communities who have been living in harmony in Kanchanpur for several decades. The Brus are found de-cementing the communal harmony and indulging in criminal activities for which we are opposing their settlement here,” Nath stated.

The officials of the North Tripura district administration claimed that the resettlement places were decided by the high-power committee at the top level and the objection of JMC in regard to resettlement in Kanchanpur had also been communicated to the top level.

A quadripartite agreement was signed in January 2020 among MHA, governments of Tripura and Mizoram, and Bru leaders to resettle the 37,136 displaced Bru people in 12 locations in four districts of Tripura by August this year. But so far, about 51 percent of the families were shifted to three locations.

The administration has been working on land leveling, brick soling of connecting roads, construction of internal link road, installation of drinking water facilities, power, Solar Street Lights, construction of common shelter houses with a common kitchen, construction of Common toilet blocks, construction of dwelling units with toilet for each family, setting up schools, Anganwadi and health centers in each of the selected areas.

As per the agreement, every Bru family living in the camps would get a 40×30 ft plot of land for building a pucca house besides, a fixed deposit of Rs 4 lakh, and monthly financial aid of Rs 5,000 with free rations supply for the next two years. The central government is providing an amount of Rs 1.5 lakh to every family for housing.

The Centre had sanctioned a package of Rs 600 cr for Bru settlement in Tripura. An amount of Rs 150 lakh was earmarked to the state government for land acquisition and the rest would be spent for the welfare of the Brus and the development of infrastructure in the localities.