The four – Ferdinand S Rani, Gregorwilson Makdoh, Saralin Rynghang and Damanbha Pde – are some of the up-and-coming Meghalaya karatekas who have already won medals at state, regional and national tournaments. 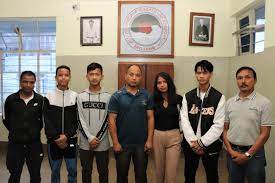 Shillong: The All Meghalaya Karate-Do Association (AMKA) on Tuesday announced that four of its young karatekas will take part in the prestigious Thailand Open Karate-Do Championship in Phuket from August 19.

The four – Ferdinand S Rani, Gregorwilson Makdoh, Saralin Rynghang and Damanbha Pde – are some of the up-and-coming Meghalaya karatekas who have already won medals at state, regional and national tournaments.

They will leave for New Delhi on August 18 where they will join the rest of the Indian contingent and then depart for Thailand on August 19.

The kumite (bouts) and kata (form and movement demonstration) will then begin on 20 August, with the tournament scheduled to conclude on August 23. The karatekas will then return to India the following day.

AMKA has a rich history of bringing medals and honour to Meghalaya and this is not the first time that its karatekas have travelled abroad for foreign competitions.

“The Thailand Open is a big tournament that attracts many top karatekas from around the world. The last time there were karatekas who then went on to compete in last year’s Olympic Games, so this is a golden chance for our four youngsters,” AMKA General Secretary Ksan Kupar Warjri said while praising the coaches Donboklang Lyngdoh, Arjun Sewa, Linza Syiem and Mingson Rymbai.

“I hope the karatekas do well, perform with a lot of spirit and come back and share with their fellow young karatekas all that they learnt from the tournament,” Warjri said.

The four karatekas will be taking part in their first international tournament and if they were nervous, they did not show it at the send-off. They all thanked AMKA, their coaches and parents for the support and hoped to do well at the event.