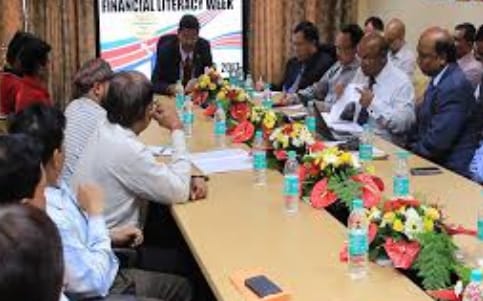 Shillong: Reserve Bank of India (RBI) began observation of Financial Literacy Week (FLW) from February 8 on the theme “Credit Discipline and Credit from Formal Institutions”. The observation will go on ti8ll February 12.

RBI has been observing FLW has every year since 2016 to propagate financial education messages on a particular theme across the country. FLW 2019 and FLW 2020 were focused on “Farmers” and “Micro, Small and Medium Enterprises (MSMEs)” respectively.

FLW 2021 focusses on creating awareness about aspects relating to Timely Repayment & Credit Score, Borrowing from Financial Institutionsonly and Responsible Borrowingwith a view to improve credit and reduce NPAs. The importance of credit for supporting the growth of the economy is well known. Credit flow to productive sectors of the economy results in proper allocation of capital, generates economic value, improves prosperity and boosts employment. It is a well-known fact that the banking system has played a critical role in the economic growth of the country and various measures have been taken both by the Government and the RBI to increase access to credit resulting in greater financial inclusion. Credit discipline, therefore, must be nurtured and reinforced to ensure that credit becomes available to all, thus leading to expansion of economic activity and growth.

As part of the FLW activities, banks have been advised by RBI to disseminate information and create awareness among its customers and public on the above theme by displaying posters that have been developed by RBI on their websites, ATMs and digital display boards deployed in their branches. Posters and leaflets on the themes of FLW 2021 have been printed in local languages and provided to banks and other institutions for display and distribution to the public.

RBI, Shillong would be organizing Special Financial Literacy Camp with a focus on 100% Digitization of Ri Bhoi district at Saiden Village, Dorbar Hall, Ribhoi District on February 09, 2021 and aField Level Financial Literacy Awareness Event at   MawkdokDorbar Hall, Mawkdok Village, Laitkroh Block, East Khasi Hills District on February 12, 2021 during the FLW. The Lead banks and other bank branches across Meghalaya were advised to conduct focused literacy camps during the week while observing extant SOPs on social distancing as issued by the Government.