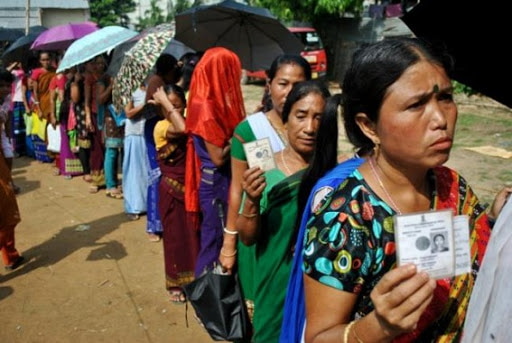 Agartala: Polling began for the 28 seats of Tripura Tribal Areas Autonomous District Council (ADC) on Tuesday morning amid high security across 1244 booths. In the first three hours about 24 percent voting has been recorded.

No incidents of booth capturing and intimidation have been reported to State Election Commission, barring Bodhjungnagar-Wakkinagar constituency near Agartala and Amtali – Golaghati of Sepahijala district.

The ruling BJP allegedly prevented the opposition voters in both the constituencies.

While Deputy Chief Minister Jishnu Dev Varma has been given the charge of Golaghati seat, Education Minister Ratan Lal Nath has been looking after election affairs of BJP in Bodhjungnagar constituency and a large number of outsiders since last night has been assembled in the areas and creating terror for the common voters and have been casting false votes since morning in presence of police personnel.

He stated that BJP lost its footing in ADC despite being in power for last three years, which compelled Pradyot to get into electoral politics for offering a breathing space to indigenous people of Tripura, but BJP has been manipulating the election process for the past few days by luring voters with cash and kind and different lucrative offers apart from threat and intimidation to the common voters.

After 72 years of attaining statehood, indigenous people of Tripura have been suffering from basic minimum services and social welfare schemes.

The most spirit fostered by Tripura royal family – communal harmony and unity in diversity–were destroyed by the so called political parties for their narrow interests and today inter-community conflict is conspicuous in the state, he observed.

“TIPRA is fighting to restore Thamsa (unity) and people of Tripura responded. So, even if the ruling party does mischief or disturb the polling process, I am confident we shall come out with flying colours and form a progressive council for the next five years in ADC,” Pradyot claimed.