At least nine ED officials took part in the raid at Chatterjee's house as part of the central agency's probe into the money laundering angle of the scam. 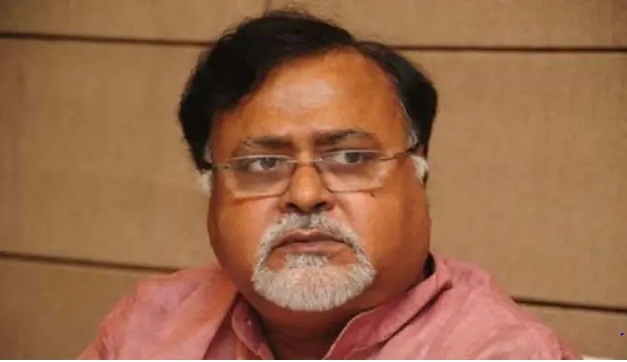 Chatterjee was the state education minister when the controversial recruitments to the posts of non-teaching and teaching staff of primary and secondary schools were made.

The arrest followed a marathon 27-hour raid at Chatterjee’s house in the Naktala area, during which the minister could not provide satisfactory replies to the posers, including those related to the recovery of the huge amount of cash from the flat of a “close associate” Arpita Mukherjee, ED sources said.

Mukherjee has also been detained.

Chatterjee, the powerful secretary general of the Trinamool Congress and a confidante of chief minister Mamata Banerjee has now been taken to the ESI hospital in Joka for medical tests.

The minister, a five-time legislator who served as leader of the opposition between 2006 and 2011, refused to answer queries from the media as he got down from the car outside the hospital in the city’s southern outskirts.

Earlier, after his arrest at around 10 AM, Chatterjee was driven in a convoy, escorted by central forces, for more than an hour, triggering suspense about the ultimate destination.

The raids had started on Friday morning at the house of the commerce and industry and parliamentary affairs minister as also the premises of his close associates and relatives in various parts of the state.

On Friday night the ED issued a statement claiming to have recovered approximately Rs 20 crore in cash, suspected to be the “proceeds of the School Service Commission (SSC) scam”, from Mukherjee’s South Kolkata apartment.

At least nine ED officials took part in the raid at Chatterjee’s house as part of the central agency’s probe into the money laundering angle of the scam.

Chatterjee’s lawyers were also present at the residence during the major part of the raid.

While some central forces were stationed on the ground floor, a number of city police personnel stood on the lane outside the house.

ED sleuths on Friday carried out simultaneous raids at the premises of a number of associates and close relatives of Chatterjee – including that of his son-in-law Kalyanmay Bhattacharya – in various parts of the state.

Search operations were also conducted at the residence of the incumbent minister of state for education Paresh Chandra Adhikari in Mekhliganj of Cooch Behar district in North Bengal.

Besides, the residence of a ruling Trinamool Congress MLA Manik Bhattacharya, a former president of the West Bengal Board of Primary Education Board, and the premises of a number of current and former officials were raided over their alleged links to the scam.

According to the ED, besides recovering the huge amount of cash, it also recovered 20 mobile phones from Arpita Mukherjee, the “purpose and use of which is being ascertained”.

“The search team is taking the assistance of bank officials for the counting of cash through cash counting machines,” the ED said in a media release on Friday night.

“Further, a number of other incriminating documents, records, details of dubious companies, electronic devices, foreign currency, and gold have also been recovered from the various premises of the persons linked to the scam,” the ED release said.

The Calcutta High Court in a slew of writ petitions had in April directed the CBI to carry out an investigation into the recruitment scam of Group ‘C’ & ‘D’ staff, assistant teachers of classes IX-XII, and primary teachers.

“In these cases, involving the illegal appointment of non-teaching staff (Group C & D), assistant teachers of Class IX-XII and teachers in Primary school, ED is investigating cases under Prevention of Money Laundering Act, 2002,” the ED said.

Earlier, Chatterjee and Adhikari were both quizzed multiple times by the CBI.

Adhikari’s daughter has been sacked from her job as a school teacher as per a Calcutta High Court order, over allegations of irregularity in securing employment by ignoring the merit list. She was asked to return the entire salary she received for her job and blocked from entering the school premises.