King Willem-Alexander described the situation with his daughter as "very difficult." "I'm really proud of her for keeping it all up, to be honest," Queen Maxima said. 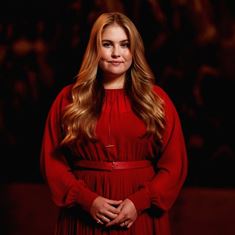 The Hague: Dutch Crown Princess Catharina-Amalia has moved from her student flat in Amsterdam to the royal palace for security reasons, King Willem-Alexander and Queen Maxima told Dutch media during their state visit to Sweden on Thursday.

“That has enormous consequences for her life. That means she doesn’t live in Amsterdam and can’t really go outside,” Queen Maxima said.

King Willem-Alexander described the situation with his daughter as “very difficult.” “I’m really proud of her for keeping it all up, to be honest,” Queen Maxima said.

The 18-year-old crown princess moved to a student flat in Amsterdam to live and study last summer. Last month, the newspaper De Telegraaf reported that security measures surrounding the princess had significantly increased.

She and Prime Minister Mark Rutte allegedly appeared in organized crime communications, which may indicate plans for an attack or kidnapping.

The police and the public prosecution service made no further statements about the matter, but after the statements of the king and queen, it is clear that the threat is serious and that it has a serious impact on the life of the princess.

“I can assure you that everyone is doing their utmost to ensure Amalia is safe,” Justice and Security Minister Dilan Yesilgoz said in a statement. “I can’t say anything about specific threats or specific security measures, but I guarantee that our security services are working hard day and night to ensure her safety.”