In her first address during the swearing-in ceremony, Murmu said her reaching the top constitutional post is the achievement of every poor in India. 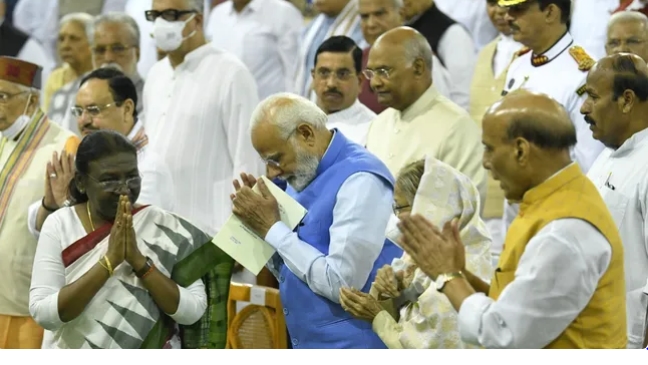 Extending wishes for a fruitful tenure to her, the Prime Minister said she gave a message of hope and compassion in her address.

“The entire nation watched with pride as Droupadi Murmu Ji took oath as the President of India. Her assuming the Presidency is a watershed moment for India especially for the poor, marginalized and downtrodden. I wish her the very best for a fruitful Presidential tenure,” the Prime Minister said on Twitter.

“In her address after taking the oath, President Droupadi Murmu Ji gave a message of hope and compassion. She emphasized India’s accomplishments and presented a futuristic vision of the path ahead at a time when India is marking Azadi Ka Amrit Mahotsav,” the Prime Minister added.

Earlier, Droupadi Murmu was sworn in as the 15th President of India in the Central Hall of Parliament House, making her the first ever person belonging to the tribal community to reach the top constitutional post.

In her first address during the swearing-in ceremony, Murmu said her reaching the top constitutional post is the achievement of every poor in India.

My nomination is evidence that the poor in India can dream and also fulfill them, she added.

“I belong to the tribal community, and I have had the opportunity to become the President of India from a ward councilor. This is the greatness of India, the mother of democracy,” she said.

Murmu said it is a matter of great satisfaction for her that those who have been deprived for centuries, who have been away from the benefits of development, the poor, Dalits, backward, and Adivasis are seeing their reflection in her.