High Commissioner Bachelet, appreciating Bangladesh’s humanitarian gesture towards the Rohingyas, underscored the need for their education through fully operationalizing the learning centers in the camps. 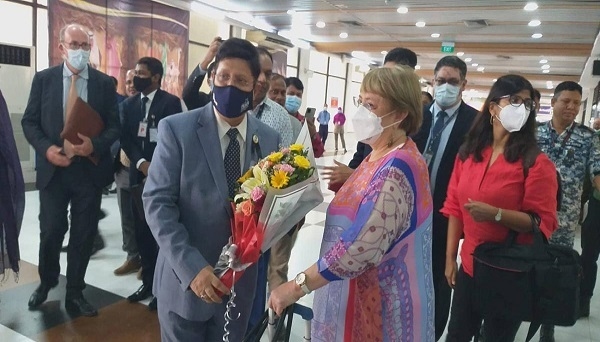 They discussed various aspects related to human rights in Bangladesh. During the meetings, Bangladesh Ministers highlighted the Government’s efforts to protect and promote the human rights of the people.

During his meeting with the UN High Commissioner, Foreign Minister Momen highlighted the Government’s achievements in women empowerment, GDP growth despite the pandemic, political stability, etc. He also underscored the fact that, in Bangladesh, the media is operating freely, with a large number of television channels and newspapers.

Bangladesh Foreign Minister urged the High Commissioner to use her good offices to effectively engage with Myanmar and repatriate the displaced Rohingyas to Myanmar. He also underscored that the protracted stay of the displaced Rohingyas in Bangladesh bears the risk of the spread of radicalism, transnational crimes, etc., and thus may hamper regional stability. He recalled that the Government took good care of the displaced Rohigyas during the pandemic by providing vaccines. He urged the UN system, including UNDP, to undertake projects in Rakhine to create a conducive environment for the return of the Rohingyas. He underscored that Bangladesh, as a developing country, strongly promotes the Right to Development.

Law Minister Anisul Huq MP, during his meeting, briefed the High Commissioner on the progress made in the reviewing of the Digital Security Act (DSA), an area on which both sides are working together, underscoring that the DSA was enacted to combat cybercrimes.

Underscoring that Bangladesh is working towards establishing a social order where human rights are guaranteed, Bangladesh Law Minister underscored the need for further international support for human rights training. Home Minister Asaduzzaman Khan MP, during the meeting, depicted how Bangladesh suffered from political violence and terrorism in the past, and how the Government has ensured safety and security in combating all these challenges. Both sides also appreciated the professional performances of Bangladeshi peacekeepers, including female peacekeepers.

Bangladesh Home Minister, in response to the High Commissioner’s query, elaborated on the Government’s sincere efforts to fully implement the Chittagong Hill Tracts Peace Accord. He also highlighted the prevailing religious harmony in the country.

Education Minister Dr. Dipu Moni, MP briefed High Commissioner Bachelet on the measures undertaken by the Government to ensure quality education, including introducing a new curriculum, skill development initiatives, stipends for female students, and access to education for disabled persons, etc. She also informed us about the inclusive measures taken for third-gender people.

High Commissioner Bachelet, appreciating Bangladesh’s humanitarian gesture towards the Rohingyas, underscored the need for their education through fully operationalizing the learning centers in the camps. She appreciated Bangladesh’s regular reporting to human rights treaty bodies and suggested a mechanism for further streamlining this. She also positively noted the possible upcoming visits of several Special Rapporteurs of the UN to Bangladesh, as well as Bangladesh’s efforts to implement the Universal Periodic Review (UPR) recommendations.

Acknowledging Bangladesh’s great difficulty in dealing with the Rohingya crisis, she assured the UN’s continued efforts to realize a safe and voluntary return of the Rohingyas to Myanmar.