"Today across the country in all the state capitals , Congress party is holding a 'Satyagraha' (in protest against ED's questioning of party president Sonia Gandhi). 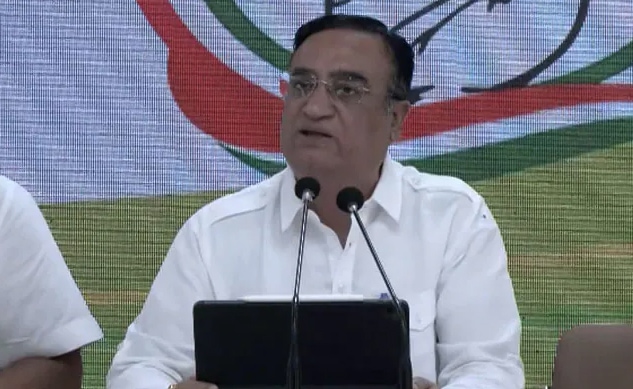 New Delhi: The Congress on Tuesday accused the BJP-led government at the Centre of denying it permission to hold ‘Satyagraha’ outside Rajghat here, as part of the party’s nationwide protest against questioning of its president Sonia Gandhi in the National Herald case, and called it an attack on democracy.

The Congress also reiterated that questioning of the party chief by the Enforcement Directorate is only a ‘political vendetta’ carried out with the intent to pressurise the Opposition from raising various issues, including unemployment and inflation.

“Today across the country in all the state capitals , Congress party is holding a ‘Satyagraha’ (in protest against ED’s questioning of party president Sonia Gandhi).

“As a part of it, in Delhi we decided to hold ‘Satyagraha’ in front of Rajgath. Its unfortunate that a principal Opposition party was denied permission by the Government of India. This is a murder of democracy,” Congress general secretary Ajay Maken said at a press conference at the party headquarters ahead of Gandhi’s questioning.

“We are all for peaceful protest. We are requesting all our workers to be peaceful.”

Attacking the BJP, Maken said, “Around 10 years back , ED had closed this case. This case was revived again only with the intent to pressurise Opposition so that we don’t raise farmers issue, price rise, unemployment and security of the country. This is a pressure politics being played by the BJP with political vendetta. We condemn it.”

“We want to make BJP government understand that democracy has two wheels – one of ruling and other of opposition. If one wheel slips away, democracy will come to an halt. So, let them allow the opposition to work,” he said.