“This is what our fear is. BJP thinks that they can win and they can change the course of the state, that is what their idea is”, Farooq added. 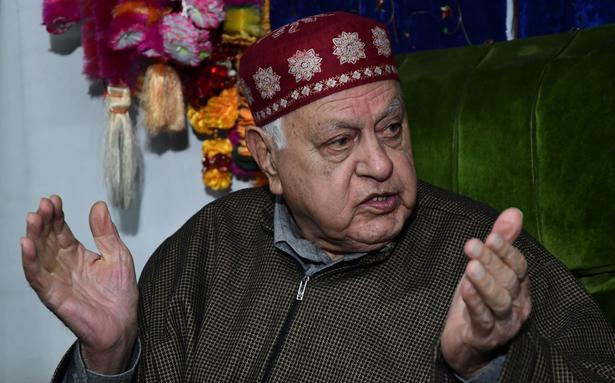 Srinagar: People’s Alliance for Gupkar Declaration (PAGD) Chief Farooq Abdullah on Saturday said Delimitation Commission proposals has further increased the alienation in Jammu and Kashmir and the panel has worked in favour of Bharatiya Janata Party only under a “planned strategy”.

“The Delimitation Commission proposals has further alienated people in Jammu and Kashmir and has worked in favour of BJP so that they could have maximum number of seats in the assembly which will help them to pass a resolution and will enable them what they did on August 5, 2019 could justify”, Farooq told reporters after a meeting of PAGD at his Gupkar residence here on Saturday.

He said, “I am sure they will go to the Supreme Court and will plead what they did on August 5 by abrogating article 370 and 35A was justified, is what their aim is. Otherwise what was the need for a delimitation commission?”.

He said when the whole country is going for delimitation in 2026, why was Jammu and Kashmir targeted. “This is what our fear is. BJP thinks that they can win and they can change the course of the state, that is what their idea is”, Farooq added.

“Where they say we want to bring people together to remove difficulties and we are going to see that these constituencies are created in such a manner that it would be easy for people to have their cases projected” he said and added “it doesn’t seem the delimitation Commission has done so. It has further alienated people in Jammu and Kashmir” “These are things which pain us”, he said.

The PAGD a conglomerate of Kashmiri mainstream parties seeks restoration of J&K’s special status. He said “I am sure that the Supreme Court will say that it has been done that is what their aim is. Otherwise What was the need of delimitation commission” Farooq said “we will fight the elections, we are not going to run away from it”.

“As far as NC is concerned, we will fight elections in any case,” he said. Asked whether PAGD would fight polls jointly, he said: “It was too premature to comment on this issue at this juncture. Let the elections come, many people will join us to fight polls,” he said.

He said “election is the basis of democracy and the very first thing in that democratic situation is the delimitation commission report. What they have done is very unfortunate”. He said, look at the parliamentary constituency of Anantnag how a member will look after a member elected in Rajouri and one from here. How would they see the other part of people in Rajouri ? he questioned. On the Russia-Ukraine war, Dr Farooq said “There will be inflation and oil prices will skyrocket,”.

He said war never helps anyone and he hoped that better sense prevails. As for as the Ukraine war is concerned, it will not affect only India alone but the whole world, he said. Farooq said, soon you will see the elections will over the prices of oil and other commodities will increase rapidly. Poor man has to face difficulties. Hope peace emerges as soon as possible in Ukraine.

People’s Alliance for Gupkar Declaration has compiled a “White Paper” on the Delimitation Commission proposal, economic suffering and the ground situation in Jammu and Kashmir and said would submit a copy to President of India and all the parliament members.

“We have completed the “White Paper” after several months on Delimitation Commission’s proposals, economic suffering and situation in Jammu and Kashmir will be presented to the associate members of Parliament including Dr Farooq Abdullah”, said the spokesman of PAGD M Y Taragami during a press conference. He said, what happened in parliament on August 5, 2019 and 6 was “unethical”, “unconstitutional” and “Undemocratic” of which there was no constitutional justification for abrogation of the article 370 and 35A”.