Kejriwal and his Punjab counterpart Bhagwant Mann held a press conference here and said the Delhi government was mulling over implementing the odd-even scheme to curb the air pollution level in the national capital. 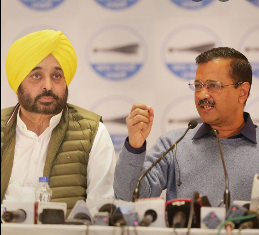 New Delhi: Delhi Chief Minister Arvind Kejriwal on Friday said that primary schools in the national capital will be shut from Saturday due to rising pollution levels.

“Outdoor activities of students above Class 5 will not take place till the pollution level comes down,” said Kejriwal.

Kejriwal and his Punjab counterpart Bhagwant Mann held a press conference here and said the Delhi government was mulling over implementing the odd-even scheme to curb the air pollution level in the national capital.

“No … blame-game politics, stubble is burning in Punjab, farmers are not responsible for it, we are responsible as we only got six months to work on this issue. I hope that with continuous efforts, by next year the incidents of stubble burning will be greatly reduced,” he said.

“Pollution is the problem of entire north India. As much as the air quality is in bad condition in Delhi, the same conditions are in other states like Uttar Pradesh, Haryana, Bihar and Rajasthan. The Aam Aadmi Party alone is not responsible for this. The Centre will have to come forward and take steps so that north India can be saved from pollution,” he added.

“There is pollution of a very poor category in Bihar-Rajasthan. Kejriwal is not responsible for air pollution in these states. Now the Central government will have to come forward and work on the causes of pollution and will have to do a joint meeting,” Kejriwal added.

“I take responsibility as the head of the state of Punjab. Our promise is that by November next year, we will solve the problem of stubble…. The Centre should also work together,” Mann said.