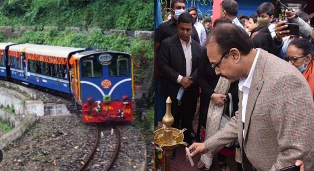 Darjeeling:In a bid to meet the increasing demand of traveling on 2 ft track of Darjeeling Heritage Railway (DHR) among the visiting travellers, the NF Railway has launched a special ” Joy Ride” for the visitors to mark the “Ghum Festival” in the hills of Darjeeling.

” The N. F. Railway has decided to operate an evening service of o­ne special joyride under the toy train service of Darjeeling Himalayan Railway.

” The joyride will run between Darjeeling and Ghum in both directions o­n every weekend starting from November 12 till December 4, 2022 for 8 trips in view of the upcoming three week-long festival,” an official of DHR said on Monday.

A Siliguir report said the NFR to clear extra rush of passengers, has decided to continue the running of 05639/05640 (Silchar – Kolkata – Silchar) festival special train for another ten trips with its existing timings, stoppages and composition.