A Birmingham 2022 spokesperson said: "Three cyclists and two spectators have been treated by the on-site medical team. 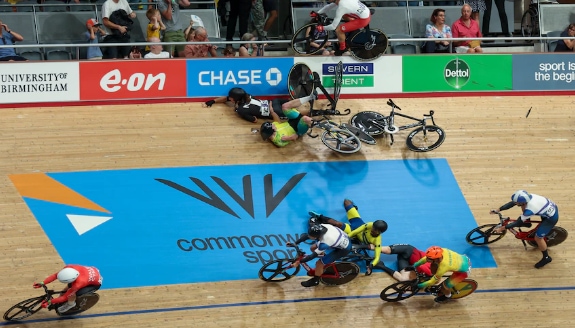 Birmingham(UK): England cyclist Matt Walls and two of his competitors besides at least three spectators were injured in a crash as Walls landed in the crowd.

The Isle of Man’s Matt Bostock and Canada’s Derek Gee was also taken to hospital for tests after the Sunday crash.

Spectators were also injured, with one being taken away in a wheelchair, the BBC said.

The rest of the session was abandoned and spectators were asked to leave while Walls was having treatment.

A Team England statement said: “Following medical treatment in hospital, Matt Walls has been discharged with stitches in his forehead, scrapes, and bruises but thankfully no major injuries.”

Walls later tweeted to thank people for their concern and also said: “I’ve somehow come away with no serious injures, just a few stitches and pretty banged up.

“I really hope everyone else involved is OK, including the spectators that may have been injured.”Walls was released from the hospital later. He and his bike flew into the crowd here leaving the 24-year-old Olympic champion with “stitches in his forehead, scrapes, and bruises” but no major injuries, said Team England.

He was treated in the stands at Lee Valley VeloPark for 40 minutes.

The crash happened in the final lap of the men’s scratch race qualifying as eight riders collided on the track.

Walls had been trying to avoid riders who had fallen in an incident that began at the entrance to the corner. The stricken pair of New Zealander George Jackson and Australia’s Josh Duffy were sliding up the banking, forcing Walls up onto the barrier and then over it into the crowd.

Footage from the race showed Walls colliding with several spectators. Gee also surfed the top of the barrier but managed to avoid following Walls into the stands.

A Birmingham 2022 spokesperson said: “Three cyclists and two spectators have been treated by the on-site medical team.

“The three cyclists have been taken to hospital. The two spectators did not require hospital treatment.”

Canadian Mathias Guillemette was disqualified from the race for causing the initial crash.

Walls’ crash came just a day after England team-mate Joe Truman was knocked unconscious and suffered a broken collarbone in a collision in the keirin.