The Indian wrestlers brought laurels on Friday and fetched medals for the country. They won six medals that including 3 gold, 1 silver, and two bronze. 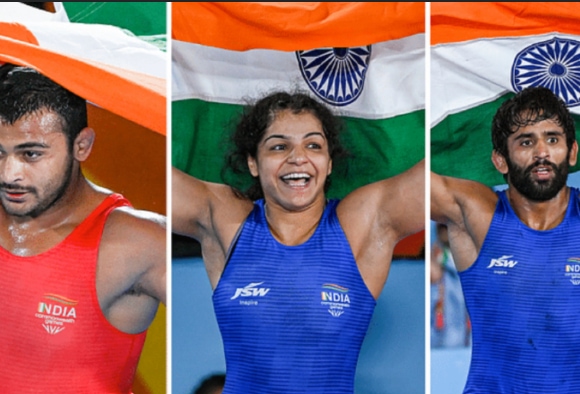 Birmingham: Even as Indians including President Droupadi Murmu and Prime Minister Narendra Modi from all corners of the country are congratulating medal winners for their achievements, India’s medal tally reached 26 with 9 golds, 8 silvers and 9 bronze medals at the close of Day 8 of 2022 Commonwealth Games here.

The Indian wrestlers brought laurels on Friday and fetched medals for the country. They won six medals that including 3 gold, 1 silver and two bronze.

Lauding the medal-winning wrestlers, President Murmu tweeted, “Historic gold medal won by Sakshi Malik in wrestling at #CommonwealthGames. She overcame stiff challenges and made Indians proud. You are a role model for our youth, especially girls. May you go from strength to strength. Heartiest congratulations!”

In another tweet, the President said, “Congratulations to Bajrang Punia for winning second successive gold in wrestling at the Commonwealth Games & creating history. Your consistency, dedication & excellence are inspirational for our youth. Your gold medals reflect the urge to be the best, the spirit of the new India.”

Congratulating Deepak, President tweeted, “Congratulations to our young wrestler Deepak Punia for winning gold at # Commonwealth Games. Your confidence and positive approach were impressive to watch. You have brought great joy and glory to India.”

Wishing Anshu, the President tweeted, “Congratulations to Anshu Malik for winning silver in wrestling at the # Commonwealth Games. You have proved your mettle as one of the best international wrestlers. My best wishes for all your future endeavours.”

Congratulating Divya, the President said in a tweet, “Congratulations to Divya Kakran for winning bronze in wrestling at Commonwealth Games. Your sure-footedness and swiftness led to a delightful victory for India. Our young wrestlers like you are full of promise for the future of Indian sports.”

The President tweeted, “Another talented young wrestler Mohit Grewal makes India proud, winning the bronze medal at Commonwealth Games. You have overcome many challenges to reach where you are. The nation looks forward to you bringing many more laurels.”

The Prime Minister also congratulated the wrestler for their brilliant performance. The PM tweeted; “Our athletes continue to make us proud at CWG Birmingham. Thrilled by the outstanding sporting performance of Sakshi Malik. I congratulate her on winning the prestigious Gold medal. She is a powerhouse of talent and is blessed with remarkable resilience.”

Congratulating Bajrang, PM tweeted, “The talented Bajrang Punia is synonymous with consistency and excellence. He won a Gold at the Birmingham CWG. Congratulations to him for the remarkable feat, his 3rd consecutive CWG medal. His spirit and confidence is inspiring. My best wishes always.”

In another tweet, PM tweeted, “Feeling proud of the spectacular sporting performance by our very own Deepak Punia! He is India’s pride and has given India many laurels. Every Indian is elated by his winning the Gold medal. Best wishes to him for all upcoming endeavours.”

Wishing Anshu PM tweeted, “Congratulations to Anshu on winning the Silver medal in wrestling and that too on her birthday. My best wishes to her for a successful sporting journey ahead. Her passion for sports motivates many upcoming athletes.”

Congratulating Divya, PM tweeted, “India’s wrestlers are outstanding and this is clearly reflected in the CWG. Proud of Divya for winning a Bronze. This achievement will be cherished for generations to come. Best wishes for her future endeavours.”

In another tweet, PM said, “Incredible form demonstrated by our wrestlers. Adding to the medals tally is Mohit Grewal. His sharp focus stands out as he brings home a Bronze medal. Congratulations to him. I hope he scales new heights of success in the times to come.”

Union Minister Thakur congratulated and wished all the medal winners. Thakur tweeted; “Splendid performance Sakshi Malik! Congratulations on this superior display of skills to win a GOLD for India. Moving from Bronze in CWG 2018 to a Gold in #CWG2022 is a display of your constant focus and dedication. You played like a champion, till you had bagged the medal !”

Congratulating Punia, Thakur tweeted, “Bajrang Punia has done it again !!! Congratulations on getting home the first GOLD in wrestling in #CWG2022! Bajrang defended his CWG Gold in a time of 10min 14 secs. A hattrick at CWG proves that you have a champion’s consistency!”

In another tweet, Thakur said, “India is wrestling its way to clinch the GOLD ! Congratulations Deepak Punia on your Gold which was won by remarkable resilience! We are so proud of you champ!”

Congratulating Anshu, Sports Minister tweeted, “Thrilled that Anshu Malik has won a Silver in her first-ever CWG outing!!! You had a tough opponent but you put up a great fight. The medal is a double celebration because it’s your birthday today! Your focused training at #SAINCOE Sonipat, foreign exposure has reaped results.”

In another tweet, Thakur said, “Mohit Grewal’s bronze medal win is testimony to his determination to overcome all hurdles and reach for his goal. Back from a two-year injury, Mohit fought effortlessly to claim a medal in his first CWG outing. This is the start of many more wins. Congratulations Mohit.”

Congratulating Divya, Thakur tweeted, “A medal in 30 seconds flat! That’s what India’s Divya Kakran did at #CWG2022 !!! Bagged the bronze in half a minute and emerged the champion. Another SAI NCOE Lucknow camper makes India proud on the world stage. Indian wrestlers are proving to be a force at CWG2022!”