He also batted for a system where corruption-related disciplinary proceedings are completed in time-bound mission mode. 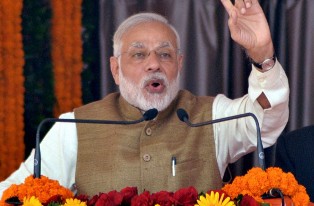 New Delhi: The corrupt must not be spared under any circumstances, no matter how powerful they are, Prime Minister Narendra Modi said addressing the Vigilance Awareness Week of Central Vigilance Commission here on Thursday.

He also batted for a system where corruption-related disciplinary proceedings are completed in time-bound mission mode.

“No matter how powerful the corrupt is, he should not be spared under any circumstances. It is the responsibility of organizations like you (CVC). No corrupt should get political and social shelter. It is necessary to create an environment wherein every corrupt person should be put in the dock by the society,” he said addressing the gathering at Vigyan Bhawan.

“We have seen that many times the corrupt are glorified in spite of being jailed, even after being proven to be corrupt. Some people take photograph with the corrupt holding their hands, they don’t feel ashamed ! This situation is not good for Indian society,” the Prime Minister added touching upon a worrying trend.

He also launched the new Complaint Management System portal of the CVC which is envisioned to provide end to end information to the citizens through regular updates on the status of their complaints.

Modi said organizations like the CVC, which act against corruption and the corrupt, need not be defensive.

He stressed that there is no requirement to work on any political agenda but to work towards making the lives of ordinary citizens simpler.

“Those who have vested interests will try to obstruct the proceedings and defame individuals associated with these institutions,” the prime minister interjected, “But ‘Janta Janardan’ is the form of God, they know and test the truth, and when the time comes, they stand with those in support of the truth.”

When you take action with conviction, the whole nation stands with you, he added.

Modi said the legacy that came down from the long period of slavery, corruption, exploitation, and control over resources, unfortunately continued even after the Independence and even gained strength.

This severely harmed at least four generations of this country, he said.

He also suggested continuous monitoring of criminal cases and asked to devise a way of ranking departments on the basis of pending corruption cases and publishing the related reports on a monthly or quarterly basis.

The CVC’s Vigilance Awareness Week is being observed from October 31 to November 6 with the theme ‘Corruption free India for a developed nation.’

The Prime Minister also awarded five students who wrote best essays during a nationwide competition conducted by the CVC on the above theme.