"10 years back they had protested... Good that they've understood there is no option apart from the Congress," said Ramesh. 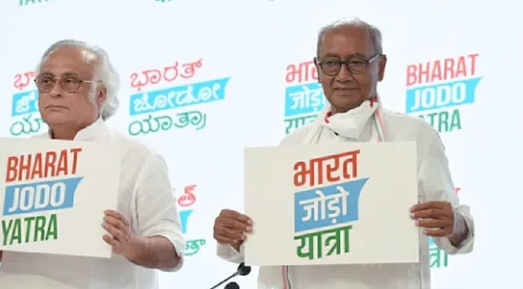 New Delhi: The Congress on Tuesday launched logos and tagline for its Bharat Jodo Yatra, which would traverse from Kanyakumari in Tamil Nadu to Kashmir covering 3,500 kilometers on feet.

Party leader Digvijaya Singh said the march will be political, but non-partisan, and called upon all who disagree with the Bharatiya Janata Party (BJP) government’s policies to join the march.

Congress leader Jairam Ramesh said price rise and economic situation, communal polarisation, and political issues like the division between center and state, abuse of the constitution, misuse of agencies, and growing centralization of power are among the three key issues that will be raised.

Asked if other parties will also join, Ramesh said anyone who agrees with their issues is free to join.

The Yatra will have three categories of participants, and 100 participants will be ‘Bharat Yatris’, who would participate in the entire march.

At any time, at least 300 participants will be marching in the ‘Yatra’, and containers will be provided as make-shift shelters for the night.

The Yatra will be launched from Kanyakumari, Tamil Nadu, on the evening of September 6.

The march will start on September 7 morning, and cross through Kerala, Karnataka, touching Andhra Pradesh, crossing over to Maharashtra, Madhya Pradesh, Rajasthan, Uttar Pradesh, Delhi, Punjab, and will culminate in Srinagar, Jammu, and Kashmir.

Party leader Rahul Gandhi will be present at the launch of the Bharat Jodo Yatra, and participate as a ‘Bharat Yatri’.

Sources said leaders of Congress allies like DMK and NCP are likely to join in their respective states. No invitation has, however, been extended to the Left parties in Kerala, said sources.

Asked about the civil society representatives including those who were part of the Lokpal agitation, and Congress seeking their support, Ramesh said, “At the meeting yesterday, there were all kinds of groups – socialist, leftist, Congress supporters, critics…all were there.”

“10 years back they had protested… Good that they’ve understood there is no option apart from the Congress,” said Ramesh.

The Congress had announced the Bharat Jodo Yatra at its Udaipur Chintan Shivir.