With the assurance from the police of immediate investigation into the incident and legal action against the criminals, the agitation was lifted late at night. 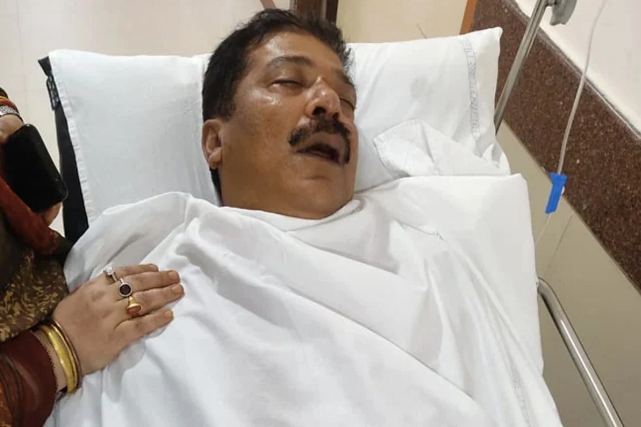 Agartala: A large number of Congress workers demonstrated in front of the Chief Minister’s house in Banamalipur at Thursday midnight seeking the immediate arrest and legal action against the attackers who had injured former BJP minister and now lone Congress MLA of the state Sudip Roybarman on NH 8 at Ranir Bazar in the afternoon under police custody.

The charged Sub Divisional Police Officer (SDPO) of Jirania of helping the miscreants reportedly belonging to the ruling BJP to hold an illegal assembly with hundreds of trippers’ vehicles with an intention to kill Sudip Roybarman and other senior Congress leaders who had been there for a party rally and joining the programme.

With the assurance from the police of immediate investigation into the incident and legal action against the criminals, the agitation was lifted late at night.

However, so far nobody was arrested in connection with the incident while Congress warned to go for massive protest unless strict action against the criminals and policemen is taken.

Meanwhile, several complaints were lodged in the local police station that the miscreants looted the sound system from the vehicle and assaulted the drivers and staff who had been hired by Congress for the programme.

At least 13 people including Roybarman were injured in the attack and seven vehicles including a police bus which was bringing the Congress workers for holding an unauthorised assembly.

The opposition CPI-M state secretary Jitendra Chowdhury and top leaders of the party met Roybarman in Agartala Govt Medical College hospital on Thursday night and alleged a section of police officers had been hand gloves with BJP-backed miscreants for the attack on Roybarman and Congress workers at Ranir Bazar.

“The Congress workers were assaulted physically when they were under the custody of the police. If someone is attacked under police custody, it is proven that the police were involved with the miscreants and paved their way to assault Roybarman and others where the police had no role. Same thing BJP goons had done with us in Khowai two days ago but couldn’t do much harm, as CPI-M supporters resisted,” Chowdhury stated.

Speaking to the media, Congress leader Ashis Saha said, the party had given prior intimation to police for organizing the Bharat Jodo movement from Ranirbazar to Jirania. When the Congress leaders and workers reached Ranirbazar, the SDPO Jirania asked not to organize the Padyatra citing apprehension of breach of law and order though it was permitted earlier.

“In protest, we staged a road blockade and police arrested us. While police were taking us into the cordon, the BJP-backed goons launched attacks at several places from Ranirbazar to Khayerpur areas. The whole incident took place in front of police but they acted in favour of the attackers,” Saha added.