Thousands lined the route of the Yatra with posters, and flags of the Congress party. 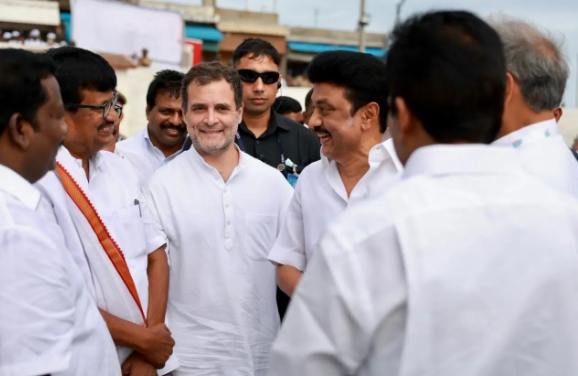 New Delhi: The Bharat Jodo Yatra continued for the third day on Saturday, with thousands joining the Congress march.

On day three, the Padayatra started from Mulagumoodu, known for pepper and other spices.

Yong school girls shared selfie moments with the former Congress President after the march resumed earlier. He took a quick tea break at a roadside stall where the tea-kiosk owner Leela enthusiastically made and poured tea for the leader.

Thousands lined the route of the Yatra with posters, and flags of the Congress party.

Cultural performances were witnessed at different points, with folk dancers performing to the tune of traditional instruments.

In the afternoon, Rahul Gandhi will hold interactions with MGNREGA workers, fisherwomen, and disability rights activists.

The over 3,500km foot march will resume post-lunch from Nesamony Memorial college around 4 pm, and the night halt for the day would be at Samuel LMS Higher Secondary school, Cheruvarakonam, in the district of Kerala.

On Thursday, Rahul Gandhi said that the Yatra is to connect with the people. It is against the ideology of the BJP and RSS which divided and spread hatred in the country,

The Wayanad MP said, “There are two visions of India. One vision is rigid and controlling and another vision is open-minded. This ‘battle’ will continue and we are playing our role.”

He also urged the entire Opposition to come together for the 2024 general elections.

The Yatra was launched in Kanyakumari on September 7, and the foot march started on the morning of September 8.