The ICG, in coordination with local police, has been carrying out a joint search operation for the missing poachers. 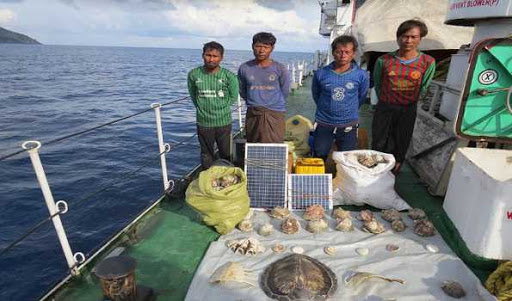 According to the ICG, on the early hours of May 2 when a patrol ship Rajshree, during routine monitoring in the area, sighted one boat operating off Barren Island close to the coast and they tried to establish communication with the boat, but the boat did not respond. Instead, the poachers carried out forced ditching of their boat on the rocky shores of Barren and tried to flee into the Island.

The manoeuvre by ICG boarding party resulted in apprehension of two poachers, while others managed to escape into the dense forest on the island while the patrol team recovered fish catch, including sea cucumber, turtle skull and conch shells from the boat.

“Two of the missing poachers were apprehended a day later on May 3 and all of them were handed over to local police at Port Blair on May 4, 2021 for further investigation”, the ICG said, adding that it was suspected that some of the poachers were still hiding in the dense forest on Barren Island.

The ICG, in coordination with local police, has been carrying out a joint search operation for the missing poachers.

This is the second apprehension by ICG in 10 days due to vigilant patrol teams of ICG which is committed to protect the sovereign rights of the country within the Maritime Zones of India, the ICG added.

Despite challenges posed by COVID-19, Indian Coast Gurad ships and aircraft are on patrol 24×7, monitoring activities in Indian Exclusive Economic Zone (EEZ) to thwart any nefarious activity in Maritime Zones of India.