Advocating the slogan, ‘Early Detection, Early Treatment’, he urged the people not to panic and immediately report and get tested at the nearest centre if they experience any symptom as it can be cured in just 14 days. 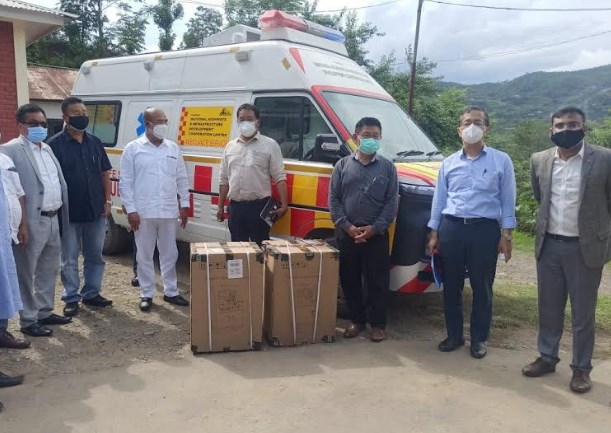 Imphal: Chief Minister N. Biren Singh visited Ukhrul, Senapati and Tamenglong districts by helicopter to take stock of COVID-19 situation there. He was accompanied by officials including Principal Secretary (Health) V. Vumlunmang, Secretary to CM N. Geoffrey and others.

He started from Kangla helipad at around 10:30 am and landed at Ukhrul at around 11 am. At Mini Secretariat complex of the district, he reviewed the measures taken up by the State Government regarding the fight against the pandemic in Ukhrul and Kamjong districts. Speaking at the review meeting, N. Biren Singh said that TK Woodland tourist resort located at Shirui would be converted into a 75-bedded COVID Hospital having 10 ventilators.

Advocating the slogan, ‘Early Detection, Early Treatment’, he urged the people not to panic and immediately report and get tested at the nearest centre if they experience any symptom as it can be cured in just 14 days. He said that the Government is stretching to its maximum limit to help the citizens in order to save precious lives in every nook and corner of the State. The Government, in its effort, had ensured that one oxygen plant in every district will be established very soon, he said.

The Chief Minister further stated that three ambulances each for every district are in the pipeline. The Health Department, in consultation with the concerned Deputy Commissioners, had been empowered to engage required doctors, nurses and other staff on contract basis if required.

He also appreciated the collective efforts of the people of Ukhrul and Kamjong districts, CSOs and medical staff to tackle COVID 19 pandemic. The State Government has arranged adequate RAT testing kits and will supply to the districts immediately, he added.

Later, the Chief Minister visited a COVID Care Centre and encouraged the patients to be confident to defeat the virus. Ukhrul CMO Dr. AS Kapangring, in his presentation stated that the total number of persons vaccinated in the district is 10,656 which comprise health workers, frontline workers and common people. The cumulative number of positive cases is 342 out of which 115 are active now and 216 have recovered, 18 were referred to JNIMS and 9 deaths. The Transit Hostel which has a capacity of 120 beds and Isolation Ward at Ukhrul District Hospital are utilized as COVID Care Centres.

From there, the Chief Minister and his team left for Senapati. In the review meeting held there, the Chief Minister assured that people can overcome the pandemic with early detection and early medication. It is the only way to prevent and overcome it, he pointed out. N. Biren Singh said that house to house inspection would be done to check whether people in home isolation have required amenities like separate rooms and toilets.

The Chief Minister assured to send required oxygen to all parts of the State. He said that an oxygen plant having a capacity of producing 200 cylinders per day would be set up in the district soon. Three more ambulances would be provided soon. 10 of oxygen concentrators were also handed over to the Chief Medical Officer of the district.

The Chief Minister also sought the cooperation of all to follow the SOPs. He also asked the DC and CMO to engage required doctors from among eligible candidates. Later, he also interacted with doctors in the district COVID ward and some COVID patients at the isolation ward.

DC Senapati said that 246-bedded COVID Care Centre had been set up in the district. Isolation Ward at District Hospital would be increased from 15 beds to 37 beds, including 10 ICU beds. More ventilators and ICU Monitor will be provided, he added.

The Chief Minister appreciated the plan to set up COVID OT for maternity deliveries and the identification of teams for Village Task Force.

Public Health Engineering Minister L. Dikho called the CM’s visit to the district as a very important one. While lauding the District Administration and frontline workers for their dedicated service, the Minister who is also the district in-charge expressed gratitude to all those in the medical profession for their commitment and dedication. He said that the three MLAs of the district are also doing their best with whatever resources they have for the welfare of the people.

From Senapati, the Chief Minister and his team proceeded to Tamenglong in the same helicopter. The Chief Minister interacted with the COVID -19 District Task Force Committee, CSO and NGO leaders and reviewed the COVID-19 situation at DC Bungalow.

As vaccination is very important mobile mass vaccination program would start very soon to combat the pandemic, the Chief Minister said. An oxygen plant with a capacity to refill 1000 LPM would be set up very soon in the district and the oxygen plant which was set up in JNIMS also would be inaugurated soon, he stated.

The Chief Minister also instructed the CMO and the health workers to take an utmost care of COVID patients who are in home isolation as they have the maximum chance of spreading. He also reminded them to visit often and monitor their oxygen level and check their medicines so that they recover soon.

The Chief Minister observed that it is the time for those in the medical profession to show their skill and serve the people. He also expressed glad for Tamenglong district being well ahead in mass vaccination and testing.

The Chief Minister also handed over 10 oxygen concentrators to Tamenglong CMO, and he also assured to provide a vehicle for CMO. During his brief stay at district headquarters, he along with officials visited the office of CMO and gave green signal to construct a new building.