The programme which was organised by District Administration, Bishnupur will continue till 28th November, 2021. Around 68 stalls from 33 Departments including banks had been set up at the venue to provide services to the people of the District. 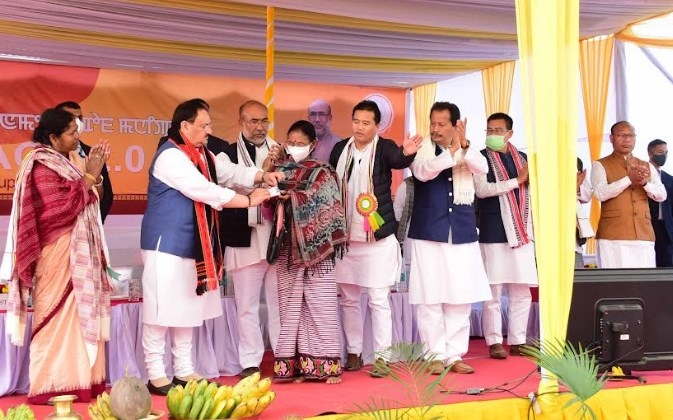 Imphal: Go to Village 2.0 for Bishnupur District was inaugurated Friday at Ngaikhong Khunou Playground, Oinam AC. The programme which was organised by District Administration, Bishnupur will continue till 28th November, 2021. Around 68 stalls from 33 Departments including banks had been set up at the venue to provide services to the people of the District.

The Go to Village Mission, which is an initiative of Chief Minister N. Biren Singh-led Government to ensure delivery of services and benefits of welfare schemes at the people’s doorstep, was put on hold for some period due to the COVID-19 pandemic. The mission had been revived as Go to Village 2.0 as the rate of infection of the virus had shown a declining trend.

Speaking on the occasion, Chief Minister N. Biren Singh stated that the Go to Village mission was introduced to ensure the benefit of different schemes, taken up under the supervision of Prime Minister Narendra Modi, reach its targeted beneficiaries. He continued that the Central Government, taking note of the hardship faced by many citizens of the country during the COVID-19 pandemic, had decided to extend distribution of free ration under the Prime Minister Garib Kalyan Anna Yojana (PMKGAY) till March 2022.

Mentioning the various welfare schemes introduced by the Central Government, N. Biren stated that the State Government had earlier introduced the Chief Ministergi Hakshelgi Tengbang (CMHT) scheme for those who are not in the Socio-Economic Caste Census and cannot avail the benefit of Ayushman Bharat Scheme. He continued that eligible people could now avail the benefit of free treatment of certain diseases up to Rs. 2 Lakh and Rs. 5 lakh under CMHT and Ayushman Bharat respectively. He also stressed that with the Go to Village Mission the hardship faced by people while availing benefits of welfare schemes would be eased now as they need not go to different offices to avail the benefits.

The Chief Minister maintained that the State had witnessed development in different sectors including roads, water supply, health and education among others in the last four and half years. The aged old bonding between hill and valley people had revived, maintaining good relations and mutual respect, he added. He appealed to the people of the district to avail maximum benefit from the programme by visiting each stall and gathering information of different schemes.

He further announced that the Youth Affairs and Sports Department is in process to improve the infrastructure of Ngaikhong Khunou Playground.