The Chief Minister said that the day is observed every year to remember the assassination of India’s former Prime Minister Rajiv Gandhi by a suicide bomber at Sriperumbudur, Tamil Nadu 31 years ago. 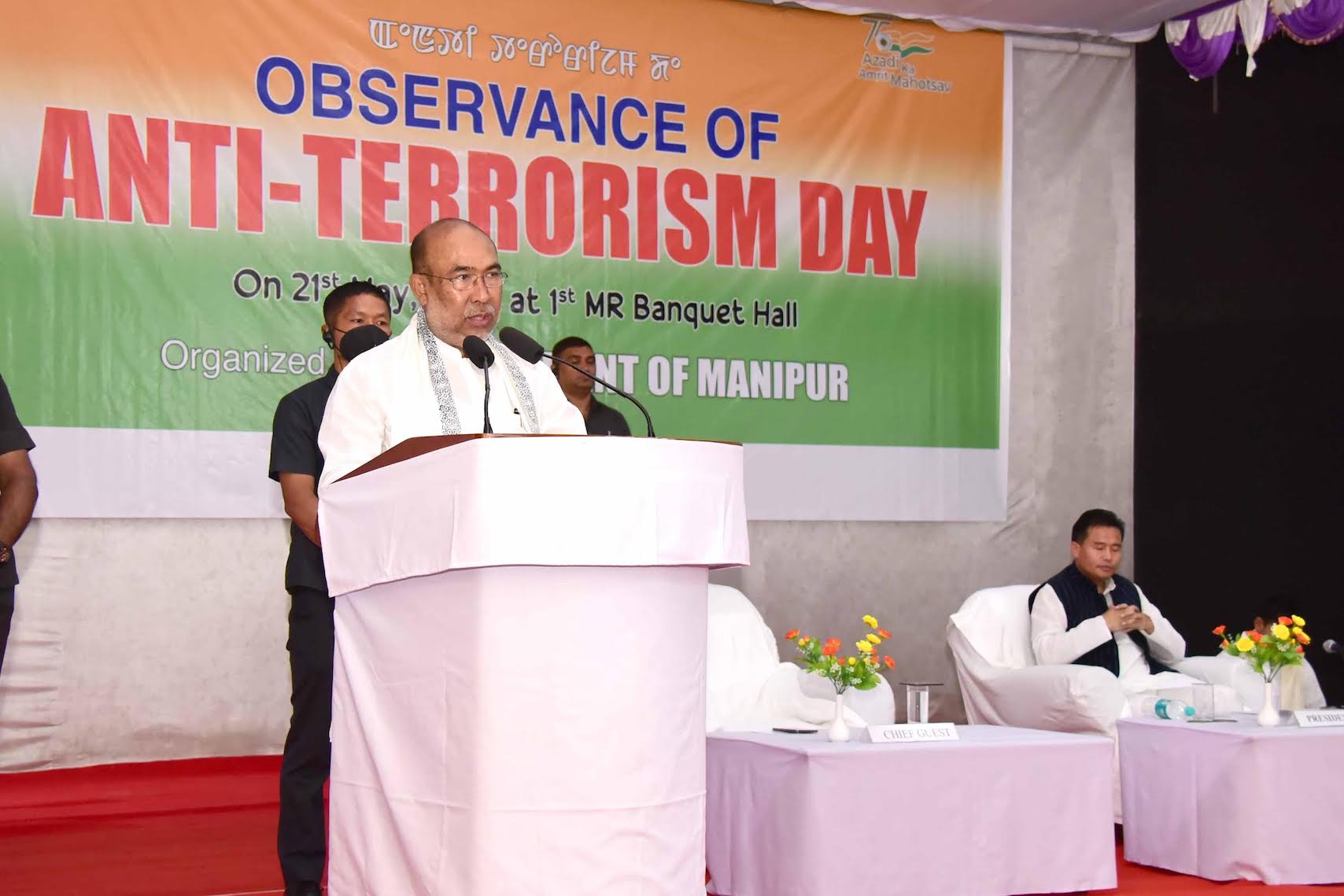 Imphal: Manipur Chief Minister N Biren Singh has called for solidarity and unity amongst all citizens, stating that the nation, Manipur too for that matter, we live today is a product of many who had sacrificed their lives for the country.

“Let us protect and face any challenges on the unity and integrity of India and Manipur,” the Chief Minister said while participating in the observance of the Anti-Terrorism Day held at the 1st Battalion Manipur Rifles Banguet Hall, here Saturday.

Speaking as the Chief Guest of the function, the Chief Minister said that the day is observed every year to remember the assassination of India’s former Prime Minister Rajiv Gandhi by a suicide bomber at Sriperumbudur, Tamil Nadu 31 years ago. The day is observed to stand and take a pledge against terrorism, he said.

Highlighting that Manipur also witnessed many inhumane activities like planting explosives at private residences, the Chief Minister said that we have to collectively condemn such incidents.

Over the past five years, however, the situation in the State has improved tremendously because of the joint effort of the security forces including state forces, central paramilitary forces, intelligence units, etc., Biren claimed.

Stressing that development and peace go hand in hand, and that without this we cannot bring development to the State, the Chief Minister said that the little development and improvement witnessed in the hills today is because of the cooperation of the people and their desire for peace.

In an appeal to the police officers, the Chief Minister said that maintaining law and order is in their hands and so we have improved both intelligence networking as well as public-police co-operation.

Further explaining the importance of improving public-government relations, the Chief Minister said that over the last five years, the State has been able to create a cohesive relationship among the people and a peaceful situation in the State with the aid of citizen centric schemes like Meeyamgi Numit. Now Meeyamgi Numit will also be held by DCs and SPs at the district level, he added.

N. Biren Singh also said that he understands the dedication of the State force and the risk they take. But, sometimes a few individuals mar the image of the entire force with their wrongdoings and misconduct, he said, highlighting the arrest of some personnel in drug related cases.

He suggested stringent actions against any police personnel found involved in drug cases, including force retirement for drug abusers and addicts in the force. Urging the police higher-ups to screen out drug abusers from the force, he said such individuals slump the whole force’s morale and diminish public trust in the force. They could be taken back if they become clean again, he added.

The Chief Minister also expressed concern over the spike in hate and communal press statements issued among communities and similar social media comments over religion, territory etc and said this needs to be checked immediately.

He further advised the Directorate of Information and Public Relations and the Home Department to take the lead and after proper discussion with the media fraternity, stop the publication, broadcast and circulation of any such statements between communities, association.

All these create unnecessary confusion and could harm the hard earned peace in the State, the Chief Minister observed.

President of the observance, Minister Thongam Biswajit Singh said that terrorism is today the biggest enemy of our civilization.

It is now time to think for the collective good and move towards becoming a foremost developed country, he said appealing to all to shun violence and move forward together.

The Minister further appealed to all to join hands, to fight to protect humanity and combat terrorist activities from our soil and to make a meaning observation of the day.

As part of the observance, the Chief Minister also administered the Anti-Terrorism Day Pledge. Artistes of the Shri Shri Bal Mukanda Dev Government Music College also performed the closing and opening songs of the observance.