Gurpreet Singh Sandhu was put to test by East Bengal strikers with two harmless efforts in the first half. 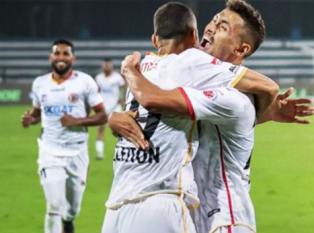 Bengaluru, Nov 11 (UNI) Former Bengaluru FC striker Cleiton Silva’s lone goal helped East Bengal to get a big win under their belt and end their losing streak at the Fortress here on Friday.

With this win, East Bengal jumped to the 8th place leavin behind Bengaluru FC to 9th in the ISL table and gain some momentum.

The winning goal came in the 69th minute when Naorem Mahesh Singh grabbed the opportunity off an error of judgement from Suresh Singh and barged into the vacant goal, before crossing it for Cleiton to score the only goal of the match.

In the 73rd minute, East Bengal almost scored the second goal through Cleiton who misfired an incredible long ball from Mahesh, chipping it over Gurpreet.

Thereafter, Bengaluru FC tried hard to get an equaliser and then go for a winner, but they were defeated by rock-solid defence from East Bengal backies.

The hosts had one shot on target in the 83rd minute when Gonzalez blocked a potential goal-bound shot from Roy Krishna and then forced a foul from him.

The first half was uneventful, but gathered heat in the second when both the teams started to foray into each other’s danger zones frequently.

Gurpreet Singh Sandhu was put to test by East Bengal strikers with two harmless efforts in the first half.

Bengaluru FC forayed into the box, aiming a shot on goal, but East Bengal frustrated them with some impressive defensive work.

The closest the hosts came in for a winner was via Javi Hernandez Freekick that sailed off the post.

A late goal-scoring effort from Cleiton was denied by a brilliant Sandesh Jhingan tackle.