China is now the second nation to successfully land a Mars rover after United States' NASA. 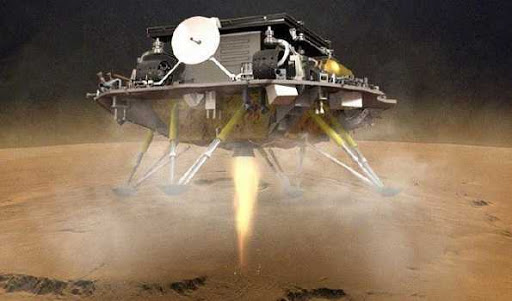 The rover — Tianwen-1 — touched down at its pre-selected landing area in the southern part of Utopia Planitia, a vast plain on the northern hemisphere of Mars, at 7:18 a.m. (Beijing Time), the CNSA announced.

China is now the second nation to successfully land a Mars rover after United States’ NASA. Interestingly, apart from China and NASA, the Soviet Union had also landed a probe on Mars, however it ended prematurely as the spacecraft failed only a few minutes after it landed.

It took ground controllers more than an hour to establish the success of the pre-programmed landing. They had to wait for the rover to autonomously unfold its solar panels and antenna to send the signals after landing, and there was a time delay of more than 17 minutes due to the 320-million-km distance between Earth and Mars.

The vehicle used a combination of a protective capsule, a parachute and a rocket platform to make the descent. The successful touchdown is a remarkable achievement, given the difficult nature of the task.

The successful orbit insertion of the Tianwen-1 mission in February made China the sixth entity to do so, following NASA, the Soviet Union, the European Space Agency (ESA), India and the United Arab Emirates.

According to Chinese media, CNSA Head Zhang Kejian said the Mars exploration mission has been a total success.

The 5-metric ton probe, which consists of two major parts – the orbiter and the landing capsule- has flown for 215 days and about 475 million km on its journey to Mars. The average flight speed was about 100,000 km per hour.

Tianwen 1 is the world’s 46th Mars exploration mission since October 1960, when the former Soviet Union launched the first Mars-bound spacecraft. Only 18 of those missions were successful.

Meanwhile, a senior NASA official congratulated China on successful landing of the spacecraft on Mars.

“Congratulations to CNSA’s #Tianwen1 team for the successful landing of China’s first Mars exploration rover, #Zhurong! Together with the global science community, I look forward to the important contributions this mission will make to humanity’s understanding of the Red Planet,” Associate Administrator for the NASA Science Mission Directorate Thomas Zurbuchen said.