"This fungal infection is leading to prolonged morbidity and mortality amongst COVID 19 patients," Joint Secretary in the health ministry Lav Agarwal said in the letter. 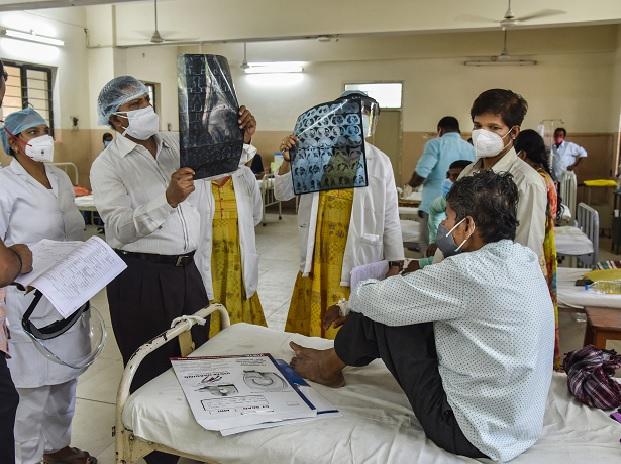 New Delhi: The Union Health Ministry has urged states and union territories to make black fungus or mucormycosis a notifiable disease under the Epidemic Diseases Act, 1897, stating that the infection is leading to prolonged morbidity and mortality amongst COVID-19 patients, the PTI reported.

The ministry, in a letter, said that in the recent times a new challenge in the form of a fungal infection namely mucormycosis has emerged and is reported from many states amongst COVID-19 patients, especially those on steroid therapy and deranged sugar control.

“This fungal infection is leading to prolonged morbidity and mortality amongst COVID 19 patients,” Joint Secretary in the health ministry Lav Agarwal said in the letter.

The treatment of this fungal infection requires multidisciplinary approach consisting of eye surgeons, ENT specialists, general surgeon, neurosurgeon and dental maxillo facial surgeon, among others, and institution of Amphotericin-B injection as an antifungal medicine.

“You are requested to make mucormycosis a notifiable disease under the Epidemic Diseases Act, 1897, wherein all government and private health facilities, medical colleges will follow guidelines for screening, diagnosis, management of mucormycosis, issued by the Ministry of Health and Family Welfare (Gol) and the Indian Council of Medical Research (ICMR).

“And, make it mandatory for all these facilities to report all suspected and confirmed cases to health department through district-level chief medical officer and subsequently to Integrated Disease Surveillance Programme (IDSP) surveillance system,” the letter stated.

Mucormycosis had been already declared an epidemic in Rajasthan on Wednesday.

The state has around 100 black fungus patients and a separate ward has been made at Sawai Man Singh (SMS) Hospital in Jaipur for their treatment.

As many as 90 people have died of mucormycosis, a rare but fatal fungal infection, in Maharashtra so far, state public health minister Rajesh Tope said on Wednesday.

The cases of mucormycosis, also called Black Fungus, have been on rise since the outbreak of coronavirus last year, though the minister did not mention any timeframe.

He also warned against indiscriminate use of steroids to treat COVID-19 patients. “So far, 90 people have died due to mucormycosis in Maharashtra. It is serious….it should not be taken lightly,” he told reporters here.

Delhi Chief Minister Arvind Kejriwal on Thursday said dedicated centres will be set up for the treatment of black fungus or mucormycosis cases at three city government-run hospitals.

He made the announcement after discussing the rise in black fungus cases with officials and specialists at a meeting here.

“We are making black fungus a notifiable disease under the Public Health Act. So now, we’ll know what all cases are there. Luckily, we’ve officially only 9 reported cases and all are stable. Now, we’ll also get the data from private hospitals,” said Tamil Nadu Health Secretary J Radhakrishna

“We’ve created a 10-member committee at the level of Director, Medical Education with medical experts to go through it and give us a clear picture. We’ve some stocks &=abd ordered 5,000 more vials of amphotericin. We’re expecting stocks soon,” he added.